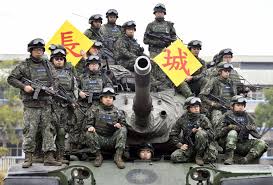 China considers Taiwan a breakaway province to be eventually reunited with the mainland.

Since Jimmy Carter ended US recognition of Taiwan in 1979, one China has been official US policy.

What Beijing considers "nonnegotiable…an internationally recognized fact…no one can change," Trump earlier said "everything" is on the table in bilateral relations with China.

China's Foreign Ministry stressed that US arms sales to the "breakaway province" breaches the one-China principle both countries agreed to decades earlier.

Taking this step by the Trump regime is another blow to bilateral relations with Beijing — already more dismal than at any time in the past half century.

Weeks earlier, China's official People's Daily broadsheet accused the Trump regime of "ratchet(ing) up its anti-China campaign in the days leading up to the (November 3) election," adding:

Continued "provocations on the Taiwan question have seriously damaged China-US relations, posed serious threat to peace and stability across the Taiwan Strait, and may lead to a crisis of conflict in the region."

On Wednesday, Trump's State Department approved the sale of US sensors, missiles and artillery to Taiwan, a package worth around $1.8 billion.

According to Reuters, the White House is set to approve the sale of five weapons systems worth around $5 billion, including drones, anti-ship and cruise missiles.

"This arms sale shows that the United States attaches great importance to the strategic position of the Indo-Pacific region and the Taiwan Strait, and is actively assisting our country in strengthening our overall defense capabilities."

The announced sale is the most significant US one to Taiwan since one-China became official US policy.

The latest announced sale to Taiwan is the 8th one since Trump took office in January 2017.

According to Professor Alexander Huang Chieh-cheng, Twiwan will be the first foreign buyer to have AGM-84H cruise missiles, using F-16V fighter jets, adding:

"These systems have the range to be projected to targets along the Chinese coastal area and can perform counter-strike missions, but with limited numbers and complex targeting requirements, they are primarily for deterrence purposes."

Supplying Taiwan with sophisticated US weapons is part of Washington's escalated hostility toward Beijing.

"This not only utterly damages the national interest of China, but also sends a wrong signal for Taiwan's separatists, which the Chinese side resolutely opposes."

US hardliners from both wings of its war party find new ways to alienate nations over prioritizing cooperative relations in pursuit of world peace and stability — notions they long ago abandoned.

The $2.37 billion sale throws more fuel on a growing fire of anti-China actions by the US — widening the breach between both countries.