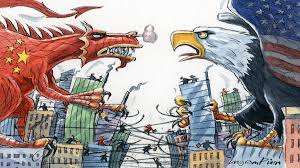 With attribution to Gilbert and Sullivan's Pirates of Penzance, Pompeo is "the very model of a modern" ugly American.

Dripping extremism and fostering hate-mongering at home and abroad, he brought his ugly message to India and East Asia.

An unannounced visit to Vietnam is also on his schedule.

On October 28, he announced the following:

Fact: China pursues cooperative relations with other countries, confrontation with none.

Fact: Imperial USA seeks dominance over other nations worldwide by whatever it takes to achieve its aims — the rule of law and human toll ignored.

Pompeo's State Department designated the National Association for China's Peaceful Unification (NACPU) – as a foreign mission of the PRC.

The organization's real mission was ignored — legitimately promoting the "one China principle" abroad.

The unacceptable designation requires any US-based staff to register as a foreign agent.

The Trump regime's State Department targeted the Confucius Institute and over a dozen Chinese media outlets in the US the same way.

The above and much more is part of US war on China by other means.

According to Pompeo's anti-China hate-mongering, "Beijing…affiliates (seek) to spread…malign influence in the US" — a longstanding US practice abroad, not how China operates on the world stage.

Separately on Wednesday, five Chinese nationals were arrested in the US — charged with being part of what Trump's Justice Department called "Operation Fox Hunt."

Its mission is tracking down fugitives from justice abroad.

The US "has ulterior motives for smearing China."

Beijing "resolutely opposes that. We call on the US to correct its mistakes immediately and to uphold (its) international responsibility, and not turn itself into a safe haven for criminals."

Three other Chinese nationals not in the US were also targeted, eight in total charged with operating as "illegal agents of the" PRC.

Six of the eight are also charged with interstate and international stalking.

Each charge faces up to five years imprisonment.

According to Eastern District of New York attorney Seth DuCharme, this case if the "first of its kind."

China's US embassy has yet to respond.

All of the above, much more, and surely more to come are part of hostile anti-China actions by the US.

They're likely to continue or worsen no matter who's elected president on November 3 or which of the one-party state's wing controls one or both houses of Congress.

Does America Have a Future?