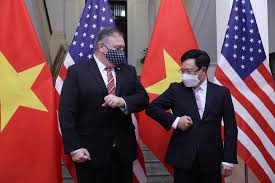 He's "likely (eying) a presidential (run) in 2024…hoping…diplomatic disasters (he presided over will) be blamed on Trump."

Separately, WaPo said he "regularly…numbed all foreign policy observers to his necrotic effect on the State Department and US foreign policy," adding:

His ethics are "compromised."

His "partisanship (is) unprecedented" in a post that's "supposed to (stay) above the domestic political fray."

His "diplomatic accomplishments" are nil, while responsible for notable defeats.

The State Department on his watch showed "slow-motion erosion."

A former unnamed US envoy described him as an obsequious "heat-seeking missile (aimed at) Trump's ass."

He's the very model of anti-diplomacy, not the other way around.

His current Asia tour to India, Sri Lanka, Maldives, Indonesia, and Vietnam is all about pressuring, bullying, and bribing nations visited to go along with US China bashing.

On all stops, he recited his usual litany of bald-faced Big Lies.

In Indonesia, he once again falsely blamed China for made-in-the-USA covid disease.

Like always on foreign tours, he defied reality, falsely claiming "the (US) is with you — a nation demanding subservience from all others worldwide, independent ones targeted for regime change.

He lied claiming the US stands for "secur(ing) the rights inherent in every human being."

Its endless wars by hot and other means, along with growing homeland police state rule, prove otherwise.

Saying "America (stands) tallest among Western democracies ignored the absence of democratic governance throughout the West — notably in the US, a notion its ruling class tolerates nowhere.

Featuring China bashing in his Thursday address, he repeated the Big Lie about persecuting Uyghur Muslims — while ignoring US wars against one predominantly Muslim country after another by hot and/or other means.

Notably it's gone on in Afghanistan and Yemen since October 2001, against Iran by other means since 1979, in Libya and against Syria since 2011, against Iraq for decades, against targeted Muslims in the US for generations, notably post-9/11.

On Thursday in response to his fabricated anti-China accusations, its Foreign Ministry spokesman Wang Wenbin slammed his "distortion of facts, are malicious slander," adding:

"Pompeo's (remarks) and the measures taken by the US side are political manipulation driven by ideological bias."

"Such pursuit of Neo-McCarthyism runs counter to the Chinese and American people's wish for more dialogue and exchange."

Calling it "doomed," GT added that it "aroused the dissatisfaction of…countries" he visited that have cooperative relations with Beijing.

Weeks earlier, Indonesian Foreign Minister Retno Marsudi said his country doesn't want to "get trapped" in a US anti-China campaign.

Efforts by Pompeo for them to side with the US against Beijing are doomed to fail.

They haven't worked before and won't likely fare better ahead — especially with belligerent anti-diplomats like Pompeo in charge of US foreign policy.