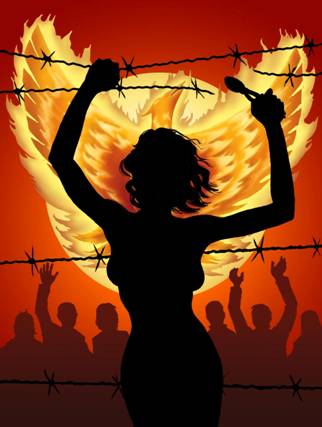 The Beginning is Nigh

As Publisher of FreedomsPhoenix.com and a weekday talk show host I can assure you that I'm aware of what wicked this way comes. But what if there is something so overwhelming and malevolent that even the most enlightened culture evaporates? Just how deep into the darkness am I to look and conjure up from the depths the possibilities of my imagination?

Freedom's Phoenix doesn't spare the readers and subscribers the ugliness in the world, the arguments from all sides of issues, the perspectives of those not widely agreed with. While we may make an effort to be cordial, we certainly don't hide our advocacies. And political correctness to us means we understand what the heck you are supporting and why.

Election cycles are milestones, markers in time. But compared to natural and many man-made disasters they are Historical Markers on the side of a small State Highway marking an event of regional significance to those responsible for supporting the monument's erection.

People's lives and what occupies their minds and efforts is far more determined by the evolving opinions of their neighbors. Often described as natural phenomenon like Changes in The Wind or Current or Tide.

Since my birth in 1961, I have been witness to ever expanding efforts to dictate a universally accepted General Public Opinion about… Everything.

I grew up in Central Florida during the Civil Rights movement until 1973 when my family moved to Arizona (from my father's family area to my mother's). My life has been saturated with negative waves of Assassination, Viet-Nam, Watergate, Energy Shortages, Inflation, Stagflation, Cold War, Olympic Boycotts, Iran Contra, Drug War, Gulf Wars, Ruby Ridge, Waco, Oklahoma City, 9/11, Economic Crashes, Pandemics, and a whole lot more. But on the inspiring side of life, we have been filled with a sense of awe and wonder at our technological advancements and scientific/personal discoveries that have altered the trajectory of humanity. So, my witness to you the day before "The Most Important Election in the History of History" is to take a breath and examine what this election is.

How much of our lives have we turned over to something/someone else? We have been convinced that our being 'ruled' is inevitable, but that we should at least get a say in how our slavery is to manifest itself. And any advocate for freedom and self-rule must be shunned to the point of not even being an option. So what is a freedom loving grandfather to do?

No matter how dark the forces against our humanity or how sophisticated their methods or all-encompassing their results, it is individual compliance and support that is crucial to their plans. But what about the non-compliant?

Vote, don't vote,… I don't judge. I run for office often, but efforts directed at vote totals misses the opportunity to have a much longer lasting impact on building an advocacy for ideas and philosophy. We vote every time we spend our time in the form of money, effort, attention, and relationships. Money is an accumulation of time and effort and I take its use seriously. But its value has been eroded in many ways, especially when it appears in my bank account through no effort of my own.

If you want to see the future of a culture, all you have to do is examine what is rewarded and what is punished. If a society rewards sloth, dependence and disability, and punishes ingenuity, effort, savings and self-reliance, it's easy to see why you get more of some traits in society and less of others. And of course, it is all done in the name of compassion and love. The appeal to our emotions is the best sign… it means that we have them, they are important and that without our emotional support the plans of They/Them/Those that will not leave us alone have no chance of success. Shame and guilt for not joining the collective effort to better the lives of those in need is an expected campaign for those not willing to give up their justly acquired property for the benefit of other's desires and preferences.

So, is this what this election is about?

To me, the promise was that the only justifiable reason for governments to exist is the protection of an individual's right to their life and the use of their life to provide for themselves (liberty and the resulting property). If any form of an agreement/contract/government doesn't have these traits, then the only other justification would be fear based. A society founded on fear is always controlled by the next bigger fear.

I'm tempted to provide many examples of policies forced on us, but the most fearful are the efforts to claim dominion over our children and the future of us all. When American's General Public Opinion is non-compliance with mandates from The Crown, what limits can we expect from The Crown to make the unwilling comply?

When presented with the latest conspiracy theory I ask myself (and whomever is bringing the information to my attention), "Well,... can They/Them/Those (that won't leave me alone) maintain and enhance their positions of power and control over others via this effort to (Fill in the Blank)?… Well, then, they are." I have no illusions that sociopaths and psychopaths in positions of power have a moral stop sign ('Oh, let's not do That,… that would be Wrong'). With 'Executive Orders/Mandates' in play, any relationship an Individual might have with their neighbors and/or customers is totally ignored.

In many interviews over the decades I have been presented with 'facts' that paint a dire future if we don't collectively control the behavior of others via a central plan. What is widely Not promoted is the discussion of Individual Liberty AND Self Responsibility. The incentives to use new technologies to eliminate the damage caused via a modern standard of living cannot even be discussed. The reason is that the elimination of the core problem isn't the real goal… control of individuals is the goal. Why?

Why? Because TTT can and we are letting them, that's why.

Only in the last few years have I processed all of the meetings with media, politicians, elected officials, law enforcement and others to realize that the common trait those I feel are against individual liberty is that they lack empathy,… they just don't care what we want, deserve, or are "legally" entitled to. It's what they want and what they think they can get away with. Even the most psychopathic individual will act in what they think is in their best interest. If justice is universal and swift, you might expect less abuse from a government Shiny Badge. But that is not the atmosphere too many of these Shiny Badgers operate in. Too often they are selected for their lack of empathy so they can be expected to enforce draconian orders from The Crown.

So what is the message to the world and ourselves during and after the 2020 American Election Cycle? I hope it isn't that we preferred to be ruled differently than the other sides offered.

The offer of a clear choice to Not be Ruled will be an option someday, sooner than I think most realize (on ballots or not). In fact, I believe that it is THIS option that is being carefully eliminated as an option in every forum imaginable. The technology to free yourself from Power Grids, Food Grids, Water Grids, Tax Grids, Transportation Grids, Education Grids, Health Care Grids, Monetary Grids, Shelter/Occupancy Permits, Work Permits/Licensing, Business Permission Slips and the Bad Guys' use of Administrative Law/Executive Orders to enforce it all will come under increasing scrutiny (I guarantee it :) And at some point, General Public Opinion will generate a plethora of politicians and a cornucopia of community activist jumping in front of a massive parade created by the people themselves advocating for the original promise of Leave Me Alone-ism.

But by then, the obvious option of living 'Above The Grid' will be the Free Market's response to a Statism bent on the subjugation of every individual on the planet via a boot on their neck.

So, while my preference is that the American People fully understand what is 'Harassing them and eating out their Substance' at a more fundamental level, I am encouraged that they are recognizing the malevolence of institutions claiming to have their best interest as a goal. It's a start… no matter the vote totals tomorrow, or weeks/months from now.

Our family has been paying close attention for over 30 years and has been engaged at a high level understanding of what we are up against, what are the likely solutions, and what is the most likely outcome. And in summary, I'd like to share this,… In the end, freedom always wins,… it just gets really messy first and all of us need to be prepared in the most basic ways (our current situation will turn into a Food thing - FYI). The arrogance and hubris of evil (willingly do harm to others for personal gain) is always exposed and humanity has always responded out of a sense of self-preservation… or we'd be extinct or fully enslaved by now.

But there is one primary concern I have (right after having lots of food on hand). What if humanity itself can be altered or eliminated. As of this moment I am most motivated by the worry of Mandated and Forced Injections of Notions & Potions by The Crown. Substances created to change us and our offspring at a genetic level is a real and immediate threat. It is our humanity that is the greatest threat to those that intend to rule us all. And I think America is starting to wake up to humanity's greatest threats.

The Beginning is Nigh.

Ernest Hancock is the publisher of www.FreedomsPhoenix.com – Talk Show Host of www.DeclareYourIndependenceWithErnestHancock.com – Publisher of Letters of Captain Marque at www.PiratesWithoutBorders.com and is now on a year long adventure with his wife/producer Donna on TheLOV3Bus at www.LoveBusLibertyTour.com

Repeal All Laws Against the Phony Crime of 'Seditious Conspiracy'