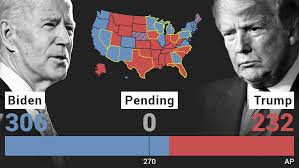 US Election 2020: The Moment of Truth Approaches

Joe Biden is not and never will be president-elect legitimately.

If all US Election 2020 votes were tabulated accurately, Trump would carry key swing states he won in 2016, enough for reelection.

As things turned out, deep state dark forces orchestrated a diabolical plot to prevent him from winning second term.

Along with corporate-controlled establishment media, state officials in key swing states and their courts (the latter so far) are complicit with the plot.

If successful, election-rigging will be official US policy henceforth in all races for high office.

If election fraud is exposed and reversed, there's a chance that future contests will require paper ballots with verified registered voter signatures.

When elections are transparent, the old-fashioned way works best.

Mail-in ballots would remain an issue. They can be discarded or counted when arriving post-election.

Independently verified signatures would reduce the chance of fraud.

What's only possible is minimizing what's able to corrupt them.

The outcome of US Election 2020 will likely decide what follows. Now is the moment of truth.

An electronically-controlled system will either be allowed to continue manufacturing outcomes of key races ahead — assuring fraudulent results at will — or the scam will be exposed, a new system replacing it.

A Gateway Pundit analysis discussed in a previous article showed that "millions of votes (were) either switched from…Trump to Biden…were lost" or discarded.

In key swing states and elsewhere, election-rigging was rife, including in Virginia.

"The same happened to President Trump's totals but in much smaller amounts."

"This resulted in over half a million more votes net going to Biden and 73% of the votes during this timeframe."

It provided his winning margin in the state of around 450,000 votes.

Similar activity happened in Pennsylvania. What appeared to be an insurmountable lead for Trump evaporated, flipping the state to Biden/Harris.

In key swing states and others, evidence shows that numerous votes for deceased and non-state residents were counted.

So were un-postmarked mail-in ballots and others arriving post-November 3.

Whistleblowers sounding the alarm about widespread fraud were ignored or treated dismissively.

DJT was reelected by millions of votes, she maintains —fraudulently shifted from him to Biden/Harris by software designed for this purpose.

An algorithm was used to calculate the number needed to swing key states to Biden/Harris by fraudulent means, she said.

According to Powell, significant election fraud occurred in "at least 29 states," adding:

"It's going to blow the mind of everyone in this country when we can get it all together and can explain it with the affidavits and the experts that have come forward."

Dominion Voting Systems and Smartmatic, producers of electronic voting machines and software, were used to flip states from Trump to Biden/Harris.

Powell maintains that the Trump campaign is preparing "to overturn election results in multiple states."

All of the above and perhaps more will have to be proved beyond a reasonable doubt in court.

If state courts in key swing states continue to side with Biden/Harris over Trump, nine Supreme Court justices will likely have final say over who won and lost.

Will massive election fraud triumph over an open, free and fair process, or will it be the other way around?

Much depends on how things turn out.

Unacceptable Foreign Occupations by US Forces

Evidence of Election Fraud in Georgia and Nevada