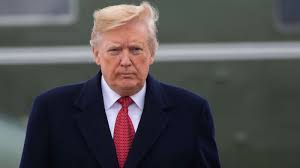 Fair and balanced news reporting and opinion is verboten at the self-styled newspaper of record.

In Nixon v. Fitzgerald (1982), the Supreme Court ruled that US presidents are entitled to immunity from legal liability for civil damages based on official actions.

By a 5 - 4 majority, the High Court ruled that presidents are not immune from criminal charges that related to official or unofficial acts while in office.

Before assuming their duties, presidents "solemnly swear (to) faithfully execute the office…to the best of (their) ability…(to) preserve, protect and defend the Constitution of the United States."

Along with granting presidents broad enforcement authority in office, the Constitution's Take Care Clause (Article II, Section 3) also requires the executive to execute and not disregard the laws of the land.

No US president was ever removed from office this way.

Many legitimate reasons have existed to impeach and remove former US presidents and the current one from office for Take Care Clause violations, abuse of power, and other high crimes, but no actions were ever undertaken to challenge them this way.

According to the Take Care Clause, presidents may not breach constitutional and statute laws, nor order or authorize subordinates to take unlawful actions.

It's arguable to claim that a US president should be held accountable for refusing to observe a statute law on the grounds of believing it's unconstitutional.

Thomas Jefferson refused to enforce the 1798 Sedition Act for this reason.

Should he have been impeached and removed from office?

Legal scholars differ in their interpretation of various laws. So do judges, including High Court ones.

These actions were and remain just cause to prosecute US presidents, congressional members, and military commanders involved for breaches of international and constitutional law.

The same holds for betraying the public trust, committing human and civil rights abuses at home and abroad, along with many other clear breaches of the law.

Yet US officials are rarely ever held accountable for offenses too serious to ignore.

Most often when it happens, they're pardoned or otherwise exonerated by a sitting president.

Ignoring major crimes he and other US presidents committed in office, the broadsheet falsely accused DJT of "challenging the integrity of the election with baseless lawsuits (sic)."

Election 2020 left no doubt that "integrity" is entirely absent from the US political system.

It's rife with systemic fraud, polar opposite democracy the way it's supposed to be, similar to how banana republics operate.

Failing to challenge the debauched US system would be a major dereliction of duty.

No former US president was ever indicted — no matter how guilty of serious offenses in public or private life.

Claiming no US president ever left office with "so much potential criminal liability" as Trump by the Times ignores a long disturbing history of executive high crimes from the nation's inception.

It also ignores the possibility that Trump's legitimate legal challenges may judicially hold up to keep him in office for a second term.

Prosecuting Trump as a private citizen would only be justifiable if similar action was taken against his criminally liable predecessors.

All US and other presidents use the power of their office for self-serving reasons and to benefit favored interests,Trump no exception.

Saying no president ever used the power of his office "to advance…personal interests" more than Trump belies reality.

They're all guilty on this count, some much more than others.

Since Trump defeated media darling Hillary in 2016, the Times and most other establishment media have gone all out to bash him, largely for the wrong reasons, ignoring the most important right ones.

They're one-sidedly for Biden/Harris over the incumbent, wanting him denied a second term, ignoring significant election fraud to produce that result.

I'm for holding all public and private law-breakers accountable for their wrongdoing.

I support open, free, and fair elections — real democracy, not the US fantasy version.

I'm for governance of, by, and for everyone equitably, according to the rule of law.

I support world peace, stability, and mutual cooperation among all nations.

The Times and other establishment media support the American way.

It's caused more harm to more people at home and abroad over a longer duration than any other nation in world history.

I'm for replacing the deeply corrupted and criminally run US system with an entirely new one — real democracy, not the US fantasy version.

As long as US monied interests runs things, governance the way it should be is off the table, breaching the rule of law with impunity to continue by the nation's ruling class.

Tinkering around the edges won't work. A whole new way of doing things is needed.