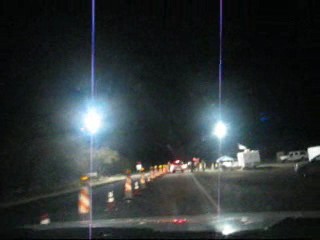 It looks like the Department of Homeland Security has expanded the scope of its suspicionless checkpoint operations near mile marker 146 on SR86 from (as some would erroneously claim) a 'simple' immigration check to also include sniffs from specially trained drug dogs.

While driving home from work on the evening of January 23, 2008, I was stopped for a 4th time at this internal checkpoint. Agents weren't just limiting themselves to demanding one's citizenship status & visually searching vehicles however. This time, a Homeland Security K-9 handler ran his specially trained drug sniffing dog 360 degrees around my vehicle at the same time the stopping agent demanded I roll down my window and state my citizenship. 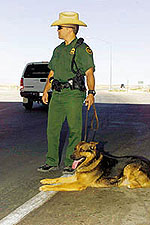 Just to clarify for folks unfamiliar with this story. I'm not discussing a border Port of Entry operation. I'm discussing a roving suspicionless Homeland Security checkpoint setup in the interior of the country, over 40 miles North of the border. Vehicles are being forced to come to a dead stop from 65 miles an hour by federal agents who have positioned themselves in the middle of a two lane State highway and refuse to identify themselves when so requested.

Several individuals have criticized me in the past by claiming it's no big deal to be seized by federal agents in the interior of the country absent reasonable suspicion to make inquiries regarding citizenship status. I suppose its also no big deal to be seized from one's travels absent reasonable suspicion so that specially trained canine units can get a good sniff of your property as well.

After entering the checkpoint and realizing a drug dog was present, I tried taking a full resolution photo of the handler and his german shephard searching the vehicle in front of me. My camera had different plans however and decided that was a good time to shut down for the evening. As such, the video of the checkpoint stop ends shortly after I enter the checkpoint.

After the drug dog was directed at me, it came up empty pawed much to the disappointment of the on-scene agents. Shortly thereafter, I was waived through the checkpoint proving once again I'm no threat to the homeland - at least until H.R. 1955 is passed by Congress and signed into law by the President.

For those interested, I have now consolidated my videos of these checkpoint stops on You Tube.

I'll also note before finishing up that I've definitely gotten the attention of Homeland Security. I'm thinking my next article may very well be titled, The Empire Strikes Back....

Homeland Security Ignoring Congressional Requests For Info On Where Illegal Immigrants Are Being..