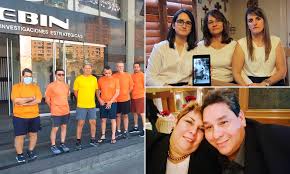 As part of the Trump regime's war on Venezuela by other means, revenues from the state-owned US subsidiary CITGO were illegally blocked.

Other Bolivarian Republic assets were seized and made available for plunder by anti-government elements.

Illegal Trump regime sanctions stipulated that while CITGO could continue operating, its revenues would be deposited in a blocked account — stealing government revenue, permitting grand theft of Venezuelan wealth, part of the US plot to crush its economy and immiserate its people.

In November 2017, CITGO president and other five senior company officials were arrested.

The deal was arranged without government authorization.

Contracts signed "put in jeopardy not only the future of our subsidiary but the patrimony of the republic."

They're vulture funds that specialize in buying financially troubled companies at fire-sale prices, a scheme to seize their assets.

During a November 2017 hearing before the Caracas Metropolitan Court, the defendants were accused of embezzlement, contract malfeasance, money laundering, serving the interests of a foreign power, and other charges.

At the time, Venezuelan President Nicolas Maduro "ask(ed) for the support of the people and the working class in this huge battle…against corruption, against treason."

He rejected a US call for the CITGO 6 to be released, saying they'll be tried for "corruption and treason."

The six former CITGO executives were found guilty of corruption and related charges.

Former company president Pereira was sentenced to 13 years in prison and fined $2 million for "intentional embezzlement and conspiracy."

Others convicted got sentences of eight to 10 years. Lawyers for the defendants said they'll appeal.

On Friday, Pompeo reacted as expected, a statement saying:

The Trump regime "condemns the wrongful convictions of the Citgo 6 (sic), in a proceeding that should be described as a kangaroo court (sic)."

"After canceling their initial appearance before a judge dozens of times over the last three years, the illegitimate Venezuelan legal system (sic) suddenly convicted and sentenced these oil executives without any evidence (sic)."

"Having already spent over three years wrongfully detained (sic) in Venezuela on these specious charges (sic), the majority of the time in horrific prison conditions, these six individuals should be immediately returned to the United States."

They won't be going anywhere for some time.