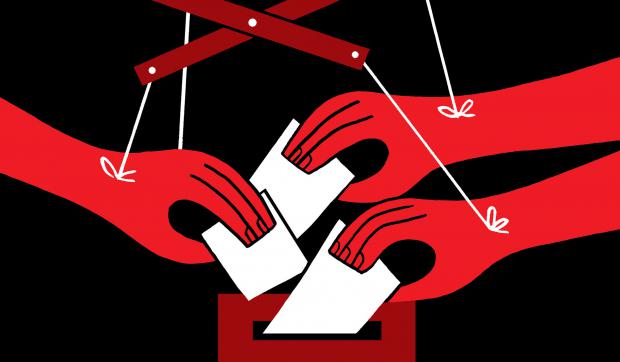 Continued NYT Coverup and Denial of Rigged US Election 2020

There's no ambiguity about Election 2020 rigging for Biden/Harris over Trump.

Yet the Times and other establishment media pretend otherwise.

Their reports willfully and maliciously lie to the public.

They can never be relied on to report accurately on cutting-edge domestic and geopolitical issues mattering most.

Fraud in key swing states and others was perhaps the most brazen in US history — a deep state plot to assure Biden/Harris are inaugurated in January even though they lost.

It's compounded by "the sheer scale of the belief among conservatives that the election was really stolen, measured not just in polling data but in conversations and arguments, online and in person, with people I would not have expected to embrace it."

Cold, hard truths about cutting-edge issues are consistently suppressed by the self-styled newspaper of record in its own mind.

Along with mocking and concealing evidence of brazen Election 2020 fraud, the Times called JFK's state-sponsored murder, dark forces behind 9/11, the Gulf of Tonkin and other US false flags "conspiracy theories."

Even the long ago debunked Russiagate Big Lie hasn't died in Times editions.

By now, almost everyone paying attention knows it's a hoax, along with countless other state-sponsored — mass media supported — scams on the US public.

Covid and 9/11 are the granddaddies of them all — with malign intent in mind by US deep state dark forces.

The Times piece was overly lengthy and convoluted, a failed attempt to deny election fraud that's part of the broadsheet's coverup.

Separately in a featured whitewash of election rigging, the Times kept pushing the Big Lie that Biden/Harris won fair and square.

It claimed that Trump is "moody (and) depressed, barely show(ing) up for work…(wanting to) rewrite the election results."

What ordinary Americans aware of what's gone on want is open, free, and fair elections whenever held — not farcical rigged ones with no legitimacy.

Most often Trump is wrong, clearly not about brazen Election 2020 grand theft.

Mocking reality, the Times compared what are likely Trump's final days in office to "a drama more common to history or literature than a modern White House (sic)."

It called his justifiable rage about election rigging a "detached-from-reality refusal to concede defeat."

It claimed his aim to expose and reverse election fraud "evoke(s) images of a besieged overlord in some distant land defiantly clinging to power rather than going into exile or an erratic English monarch imposing his version of reality on his cowed court (sic)."

The above and volumes more rubbish passes for what the Times calls "all the news that's fit to print."

Left unexplained is that time and again on domestic and geopolitical issues mattering most, the Times is a lying machine.

It consistently features misinformation and disinformation, truth-telling on big issues like election fairness and when it's absent banned in its editions.

Trump's "successor" is not "president-elect." If inaugurated in January, he'll enter the White House illegitimately.

Given his deteriorated physical and mental state, it'll be unclear whether Biden or his double takes the oath of office, shows up for public appearances, interfaces with foreign leaders, and conducts other affairs of state.

The US presidency is the world's most powerful office.

With Biden in charge — if things turn out this way — the weakened shadow of his long gone former self and illegitimacy will make him more a laughing stock than leader.

For All Americans Who Think They Still Have A Country, Here Is Bad News