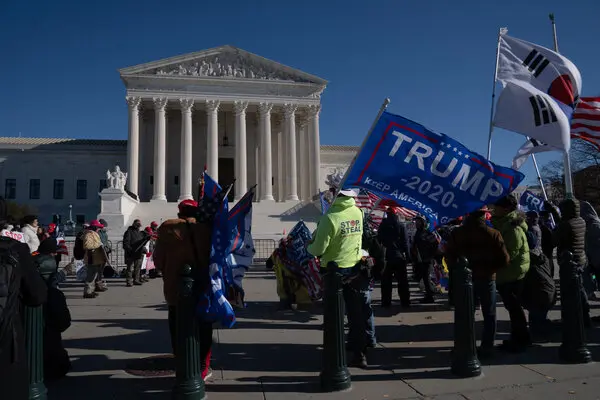 The manipulated outcome for Biden/Harris over Trump was the latest example of US fantasy democracy, the real thing prohibited throughout the country's history by its ruling class.

Losers can be declared winners and not just for president.

Time and again, US dark forces get away with election theft because corporate-controlled establishment media conceal it.

The 2020 process was a fantasy election, a coup d'etat by other means — losers Biden/Harris selected over winner Trump to deny him the second term he won.

When losers are declared triumphant over winners, democracy is a mirage, the real thing nowhere in sight.

Make no mistake. If it ever emerged for real in the US, it would be banned.

As long as corporate-controlled electronic voting machines are used in the US, dark forces will decide elections, not the will of the people.

Calling results in these states "unconstitutional," he argued that these states "flooded their people with unlawful ballot applications and ballots while ignoring statutory requirements as to how they were received, evaluated and counted."

They "destroyed…trust in the integrity of (the) election" process in their states by unlawful shenanigans.

They breached "statutes enacted by their duly elected legislatures, thereby violating the Constitution."

By so doing, they "preclude(d) knowing who legitimately won the 2020 election and threaten to cloud all future elections."

Paxton called on SCOTUS "to correct this egregious error (aka brazen fraud)" by ordering the above scofflaw states to suspend their electors until nine High Court justices rule on this issue.

When disputes between or among states occur, SCOTUS has original jurisdiction to rule on them under the Constitution's Article III, Section 2, Clause 1.

The same complaint applies to Georgia, Michigan and Wisconsin.

SCOTUS original jurisdiction power is why it accepted the Texas lawsuit without first having to be ruled on at the district and appeals court levels.

According to Paxton, the above four states breached  Constitution's Article II, Section 1, Clause 2 — the Electors Clause.

It vests "state legislatures with plenary authority regarding the appointment of presidential electors."

Other state political and judicial officials have no constitutional authority to circumvent legislatively enacted state laws.

The Texas complaint also accuses the above four states of treating voters in their counties differently.

It states that "more favorable treatment (was) allotted to votes (in areas) administered by local government under (Dem) control."

In so doing, Paxton argued that these states breached the 14th Amendment's Equal Protection Clause.

In 2000, the Supreme Court ruled for Bush over Gore, citing the 14th Amendment that "prohibits the use of differential standards in the treatment and tabulation of ballots within a state."

In its High Court complaint, Paxton argued that Texas was damaged because in "the shared enterprise of the entire nation electing the president and vice president, equal protection violations in one state can and do adversely affect and diminish the weight of votes cast in states that lawfully abide by the election structure set forth in the Constitution."

They "fail(ed) to follow state election law(s)" enacted by their legislators.

"(U)unauthorized acts (were engaged in) by state election officials and their designees in local government (to the extent) of patent and fundamental unfairness."

The states "acted unconstitutionally to lower their election standards…with the express intent to favor their candidate for president."

Their unconstitutional actions changed Election 2020's result by circumventing their own laws.

The Texas suit joined by 17 other states calls on the High Court to order the above four states to "conduct a special election to appoint presidential electors."

Paxton's lawsuit is unprecedented in US history, his arguments strong and persuasive.

As things now stand, it appears that nine High Court justices will have final say over Trump v. Biden in Election 2020.

Will they uphold the rule of law or swim with the tide, most always following the latter practice.

Momentum at this stage favors leaving things as they now stand, regardless of how unfair and contrary to the rule of law.

If a High Court majority rules for Trump over Biden/Harris — and by its action changes the election's result — perhaps a national convulsion could follow, what the justices clearly want avoided.

At the same time, failing to reverse brazen fraud will virtually assure that open, free and fair US federal elections no longer exist.

As things now stand, that's the disturbing reality about US fantasy democracy — the real thing prohibited.

I surely hope the rule of law will triumph over the illegitimate Election 2020 result.

Trump is "running out of runway." Turning things around in his favor would be like successfully "land(ing) a jumbo jet on a postage stamp."