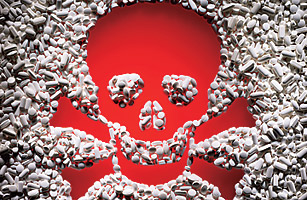 The NYT is in the vanguard of manipulating the public to self-inflict potentially serious harm to their health and well-being.

Along with government officials, Pharma, and other establishment media, the self-styled newspaper of record is promoting hazardous to human health covid mass-vaxxing with unapproved, high-risk, experiment vaccines no one should trust.

"People Are Dying. Whom Do We Save First With the Vaccine," the Times deceptively asked?

Deaths in the US are similar to numbers in previous years.

The vast majority of deaths attributed to covid are from seasonal flu/influenza.

The same pattern occurs annually in the US and worldwide.

Instead of truth-telling about what's going on, the Times is complicit with US dark forces and Pharma in promoting mass-vaxxing with what may cause irreparable harm if used as directed.

The Times: "(S)upplies of covid vaccine (are) among the world's most precious, scarce resources (sic)."

How it's distributed "will…determine who dies and who lives (sic)."

Vaxxing with hazardous covid vaccines risks serious illnesses or deaths, not the other way around as the Times and other major media claim.

Separately, the Times reported that EU mass-vaxxing "start(ed) with nursing homes as focus" — without explaining the following:

The elderly with weakened immune systems — who are likely taking a cocktail of other drugs for various illnesses — are most vulnerable to harm from covid mass-vaxxing.

Prioritizing them in the US and EU may be a population reduction scheme — polar opposite their promoted use.

Instead of explaining it, the Times falsely claimed that "inoculations offered a rare respite as the continent struggles with one of its most precarious moments since the coronavirus pandemic began (sic)."

Left unexplained by the Times is the following:

Most Europeans and healthcare professionals refuse to be vaxxed with what they know is toxic and must be avoided.

If they don't trust the safety of these vaccines, they'll surely advise patients to avoid them.

According to an Ipsos, survey, over half of French adults won't be vaxxed for covid.

In Italy and Spain, nearly two-thirds of respondents said they'll avoid it, nearly 80% in Britain.

A majority of adults in 15 surveyed countries won't be vaccinated with what's too experimental to trust.

According to Pharma co-conspirator/profiteer Anthony Fauci, covid is spreading because Americans have too much freedom.

He called for sacrificing normality, hunkering down, staying home during the holiday season and following what's abnormal — along with getting vaxxed with what no one should touch.

He lied claiming that people who won't "comply with (covid-related) public health measures…hurt" everyone, adding:

"There are people in various parts of the country who still believe that (covid) is a hoax, that it's fake — even when in their own state the hospitals have been overrun with patients in the hospital beds and in the intensive care unit (sic)."

Fact: Numbers of 2020 hospitalizations are no different than in previous years.

Fact: The vast majority of hospitalized patients are from illnesses unrelated to covid.

Fauci has business ties to covid vaccine-producing firms. He stands to profit hugely from mass-vaxxing.

Days earlier on national television, he pretended to be vaxxed for alleged covid protection — then forgot which arm he claimed experienced soreness, pointing to the other one, exposing the ruse.

He's a huckster, a figure with a medical degree who never treated a  patient.

He's scamming the public to be vaxxed with what he won't touch, nor permit for family members.

He supports lockdowns and quarantines that caused the Greatest Main Street Depression in US history.

The same goes for US dark forces and their press agent media — harming public health, safety, and well-being instead of going all-out to protect what's too vital to lose.