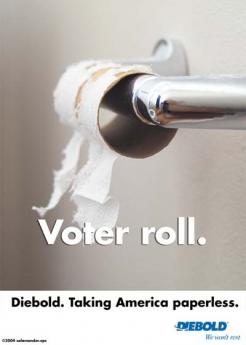 Ernie,
I voted in my precinct in Sun City at about 8am. In the short time I was there, about HALF of the Republicans arriving to cast their vote were told they were listed as having already voted via an early ballot. This surprised them all, since they would not arrive to vote if they had already cast a mail-in ballot.
The conversations went like this,...
Staff: "Did you receive an early ballot?"
Voter: "I don't know." or, "Yes, but I didn't use it."
Staff: "Well, if you received it, you had to use it. Because it shows here that you already
voted."
Voter: "But I didn't vote yet. I never sent it in."
Staff: "Yes, but if a ballot was sent to you, you are put down in the records as having voted,
so as to prevent fraud by voting twice."
Voter: "Why would someone send me a ballot I didn't request?"
Staff: "Perhaps your wife ordered one for you."
Voter: "So I can't vote?"
Staff: "Oh yes, you can vote. Just step over to that table and you'll be given a provisional
ballot. They'll check those against the early ballots to verify you didn't already vote
and then your vote will be tallied."
I don't know if all the ladies in Sun City were ordering early ballots for their men, but there was what appeared to me to be an exceedingly large occurance of these surprised provisional voters.
P.S.: Arpaio also had his signature gatherers (probably posse) outside the polling place for his next run for sheriff.

I always get an early ballot, but drop it off at the polling place on the day of the election. We'll have to see how this all looks after the dust settles and all of the "early" ballots are counted...

My wife is an elected state committeeman, an elected PC, and on the state board of directors of the AzFRW, we live in a rural county and small town... and the poll workers made her vote a provisional ballot!! What a crock of sh*t! How many others out there???

Oh really? What have they done about it?.....I bet NOTHING.
The Americans have TALKED about it,and,well!.....That`s it.
So! Americans,just to home and shut up,and take what the people you elected hand down to you.

Yeah this frustrates the hell out of me. I registered to vote when I got my license all the way back in October, The polling place I voted at this morning was literally RIGHT ACROSS THE STREET from where I live. I go in to vote and I'm not in the books at all and had to fill out a provisional ballot. Pure B.S. I never signed up for absentee or early voting when I registered why the hell wasn't I in their list? there were 6 of us in a row who had to fill out provisional ballots, and they never gave me any sort of receipt to check back on them but I still reported the problems I encountered to the Paul campaign.

This was happening over here in Scottsdale too at 8 A.M. as well.

How Media And Tech Elites Seized Control Of Elections

How The Left Destroyed Election Integrity