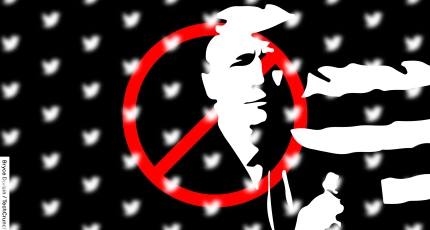 Who'll next be censored and silenced?

Will muckraking, investigative, truth-telling journalists be banned by Twitter and other social media?

Will everyone diverging from the falsified official narrative face online banishment across the board?

Will cutting edge websites I and many others follow no longer be accessible ahead, including my own?

Will my writing and by others I respect and follow be criminalized if continue?

GW Bush once calling the Constitution "just a goddamned piece of paper" is reality as tyranny incrementally replaces the rule of law in the US.

It began happening post-state-sponsored 9/11, especially since last year to the present and what may lie ahead.

Arundhati Roy called them "mesmerizing, not as documentation of the history of the US war in Indochina, but as insight into the minds of (diabolical) men (and women) who planned and executed it."

The Pentagon Papers exposed US war on humanity abroad.

Most Americans are unaware of what's going on and the ominous threat it poses — notably looking ahead to what may follow what's happening now.

The road to tyranny moves incrementally toward becoming full-blown.

How it happened in Nazi Germany may be replicated in the US — wrapped in the American flag for mass deception.

What's happening is "a steady assault on every fundamental (aspect) of our Constitution (to create) an executive government (to) rule by (police state) decree."

So far it's not with jackboots in the streets. It's by Big Government in cahoots with Big Media manipulation of the public mind and more.

In includes censorship, what I call the new abnormal.

Friday I stressed that if social media can deny a US president his First Amendment rights, will state approved censorship on everyone diverging from the official narrative become the new abnormal?

Will truth-telling on vital issues be criminalized?

Will independent voices be threatened, intimidated, and mistreated like Chelsea Manning, Julian Assange and other heroic whistleblowers?

Will full-blown tyranny ahead permit no challenges to diabolical aims of US dark forces — enforced by police state harshness?

If lost, all other rights are threatened with abolition. Tyrannical rule will supersede the rule of law.

On June 30, 1971, the US Supreme Court ruled that the NYT and Washington Post were legally permitted to publish material in the Pentagon Papers.

A per curiam statement (meaning by the court, not a single justice) said the following:

"Any system of prior restraints of expression comes to this court bearing a heavy presumption against its constitutional validity."

The government "thus carries a heavy burden of showing justification for the imposition of such a restraint."

"Congress shall make no law respecting an establishment of religion, or prohibiting the free exercise thereof; or abridging the freedom of speech, or of the press; or the right of the people peaceably to assemble, and to petition the Government for a redress of grievances."

Banning Trump by Twitter with perhaps other social media to follow flagrantly breached First Amendment rights and the High Court's ruling that upheld them.

It affirmed the constitutional right to speak or publish truthful information in the public interest no matter how it was obtained.

Britain's mistreatment of Julian Assange on orders from Washington flagrantly breached the US First Amendment — upheld by the US Supreme Court numerous times.

The government's injunction to prohibit publication by the NYT and Washington Post "should have been vacated without oral argument when the cases were first presented," adding:

"(E)very moment's continuance of the injunctions…amounts to a flagrant, indefensible, and continuing violation of the First Amendment."

"The press was to serve the governed, not the governors."

"The press was protected so that it could bare the secrets of government and inform the people."

"Only a free and unrestrained press can effectively expose deception in government."

"(W)e are asked to hold that…the executive b ranch, the Congress, and the judiciary can make laws…abridging freedom of the press in the name of 'national security.' "

Justice William Brennan argued that publication of the Pentagon Papers was a First Amendment right.

So did Justice Thurgood Marshall, adding:

The term "national security" is too broad and ill-defined to be used as justification to restrain publication of information in the public interest.

The right of speech, press, and academic freedoms is fundamental in a society claiming to be free.

I profoundly condemn most Trump actions throughout his tenure.

I strongly disagree with and reject most of his views.

But I defend his constitutional right to express them on social media, in speeches, on television, and other public remarks — no matter how contrary to my own.

That's what the rule of law in an open, free and fair society is all about.

Without the right of unstricted free expression in all forms — no matter how offensive to some — a nation safe and fit to live in no longer exists.

Silencing Trump may be prelude to making it the police state law of the land on the fabricated pretext of national security and/or whatever other phony pretext(s) dark forces cook up to justify what's unjustifiable.

James Madison once called "(t)he accumulation of all powers, legislative, executive, and judiciary, in the same hands…the definition of tyranny."

When rule of the people becomes of, by, and for privileged interests at the expense of exploited and silenced others, tyranny is the law of the land.

Things today are at an ominous crossroads.

If left unchecked, the nation I grew up in long ago no longer will exist — replaced by polar opposite what just societies most cherish.

Martin Niemoller's long ago ominous warning is relevant today in the US, saying:

"First they came for the socialists, and I did not speak out—because I was not a socialist."

"Then they came for the Jews, and I did not speak out—because I was not a Jew."

"Then they came for me—and there was no one left to speak for me."

First they enacted police state laws in the US post-state-sponsored 9/11.

Then came 9/11 2.0 last year — followed by banning a US president's free expression rights on social media.

Is the the path Niemoller warned about now followed by US dark forces?

Are things well along toward abolishing America as once existed, warts and all?

Is there time to stop and reverse what's going on?

"Never doubt that a small group of thoughtful, committed citizens can change the world."

"Indeed, it's the only thing that ever has."

I've stressed many times that ordinary people have power when use it.

Now's the time for its use to save what otherwise may be permanently lost.

Below is Twitter's attempt to unjustifiably justify Trump's "permanent suspension" of his First Amendment rights, saying:

"(W)e have permanently suspended (his) account due to the risk of further incitement of violence (sic)."

In response to Trump's tweet that he "will not be going to the inauguration on January 20," Twitter falsely claimed the following:

His tweet "is being received by a number of his supporters as further confirmation that the election was not legitimate and is seen as him disavowing his previous claim made via two Tweets…that there would be an 'orderly transition' on January 20th (sic)."

His tweet "may also serve as encouragement to those potentially considering violent acts that the inauguration would be a 'safe' target, as he will not be attending (sic)."

The above claims defy and reinvented reality.

Claiming otherwise by Twitter and other media reinvented reality to unjustifiably blame Trump for what he had nothing to do with — followed by Twitter's unconstitutional ban on DJT.

Was its action a shot across the bow warning against others using its platform?

Henceforth will everyone's views that conflict with the official narrative be silenced by Twitter and other social media?