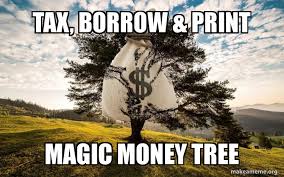 What Biden proposed Thursday may or may not be what Congress passes and gets enacts into law.

Whatever becomes law, special interests may largely benefit when funds are dispensed.

Much of what was in last year's $2.2 trillion CARES Act went to business and other special interests over Main Street needs.

According to Wall Street on Parade (WSOP), around 75% of $454 billion allegedly earmarked for emergency lending to save businesses and jobs was unaccounted for by Treasury Secretary Mnuchin.

WSOP later learned that the missing funds were in a Mnuchin "slush fund" to be used at his discretion for what he favored, not for their intended purpose, adding:

Will something similar play out after Biden/Harris replace Trump next week?

The amount at most might cover essentials to life for around a month.

The plan also includes $400 in weekly unemployment insurance (UI) benefits through September, along with rental assistance; emergency paid leave, and funding for schools.

It calls for a $15 per hour federal minimum wage.

Evictions and foreclosure moratoriums are extended until end of September.

Another $170 billion is earmarked for K-12 schools and higher education institutions that includes mass-vaxxing students.

Nearly always when PCR tests for covid are positive, the diagnosis is false.

According to 22 eminent scientists, around 97% of PCR tests for covid produce false positive results.

Yet the ARP includes $50 billion for testing, another $20 billion for promoting mass-vaxxing nationwide in cahoots with state and local governments.

What's needed are weekly stimulus checks of at least $600 as approved last year that ended on July 31.

The proposed plan also extends a 15% increase in Supplemental Nutrition Assistance Program (SNAP) benefits and $3 billion for the Women, Infants, and Children (WIC) program through September.

Proposed $225 billion in aid for small businesses includes $15 billion in grants, $175 billion in loans, and another $35 may likely go at least largely to corporate favorites.

Dem leadership supports the plan. Most Republicans likely to want less than proposed.

If conservative Dems support them, one alone in the equally divided Senate perhaps enough, the plan could be pared back.

Nothing is included for debt bondage from America's student loan racket as Biden earlier pledged.

He could do it by executive order post-inauguration.

Reportedly, a follow-up stimulus package will be introduced in February that allegedly will call for jobs creation, infrastructure related programs and others.

Whatever helps Main Street is positive.

Yet time and again, Republicans and Dems are generous to corporate America and other special interests.

Notably since the neoliberal 90s they've been stingy to Main Street.