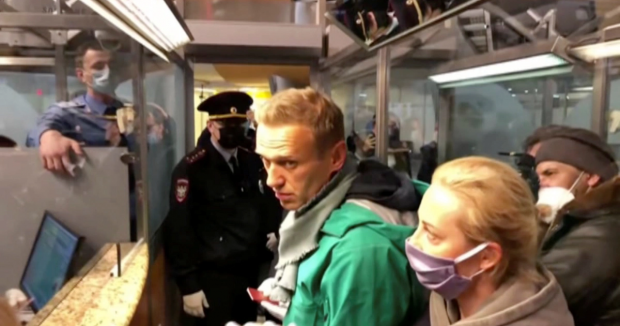 Alexey Navalny long ago betrayed his country for benefits afforded him.

According to Sputnik News correspondent Evgeny Mikhaylov last summer, scandals surrounding Navalny got him to close his ACF.

They include "a criminal probe into the suspected laundering of around 1 billion roubles ($15.3 million), obtained by the foundation via criminal means."

Last summer's ruckus over his alleged poisoning by a deadly novichok nerve agent — able to kill anyone exposed in minutes — became a pretext for stepped up Russia bashing.

Navalny is very much alive and well, his illness diagnosed as a metabolic disorder by Russian doctors in Omsk.

Three days of exhaustive tests found no novichok or other toxins in his system.

Treatment stabilizing him by their efforts enabled his safe transport to Berlin for further treatment and recuperation.

Had he been poisoned by novichok as falsely claimed, his death would have been near-instantaneous.

Around five months after arriving in Berlin, Navalny returned to Moscow on Sunday.

On arrival he was detained by Federal Penitentiary Service agents, a statement saying:

The agency wants his suspended sentence for criminal activities replaced by a real one.

Earlier he was convicted on multiple embezzlement charges.

"The Main Investigation Department of the Russian Investigative Committee has collected sufficient data, on the basis of which a criminal case has been initiated against Alexey Navalny and other persons…under Part 4 of Article 159 of the Russian Criminal Code"— pertaining to large-scale fraud.

Millions of dollars raised by his ACF were "spent…for personal" reasons.

Included was "the acquisition of private property, material values ??and payment of expenses (for) recreation abroad," as well as for other purposes.

"Thus, the funds collected from citizens were stolen."

"(A)t present, investigative actions are being conducted to establish all the circumstances of the crime, as well as other persons involved in its commission."

"Have respect for international law, do not interfere with the national law of (other) sovereign countries, and deal with your own domestic problems."

"Russia has registered multiple violations of the probation terms by Mr. Alexey Navalny during the year 2020."

Amnesty International shamefully called him a "prisoner of conscience," ignoring his fifth column and other criminal activities.

Though his ACF was closed last year, its office apparently remains open.

According to his spokeswoman  Kira Yarmysh, the office "is being searched…staffers…allowed to leave for now."

According to Russia's Investigative Committee (IC) that's involved in pursuing a criminal case against Navalny, he and other ACF members received large amounts of cash in rubles and other foreign currencies from January 2016 to December 2018, adding:

Cash gotten was "of criminal origin." Navalny and accomplices are accused of "launder(ing)" funds received for personal use.

Numerous illicit "accounts" belonging to Navalny and others connected to him were discovered.

He remains in custody, pending a court ruling on his status after breaching terms of his suspended sentence for criminal activities.

Vladimir Putin and his spokesman Dmitry Peskov earlier accused him of involvement with US intelligence community agencies against Russia.

Last Thursday, Russia's Federal Penitentiary Service said "convict A.A. Navalny was put on the wanted list with instructions that he be detained when his whereabouts were established."

Russia's "Federal Penal Correction Service in Moscow is obliged to take all actions to detain the offender before a court decision to replace the suspended sentence with a real one."

Days earlier before returning to Moscow, he again repeated the Big Lie about being poisoned by novichok on orders of Vladimir Putin.

In the days or weeks ahead, Russia's judicial system will rule on whether he'll be imprisoned for a reported three years for breaching probation terms.

If his earlier suspended sentence is criminalized for trial —  along with whether an ongoing probe on alleged "large scale fraud" results in new charges — he potentially faces years more behind bars.