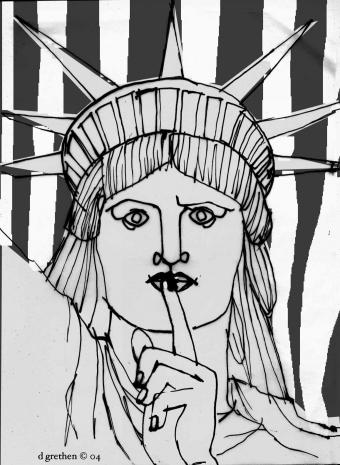 "There is a pall over our fire. (There are) attempts to squelch dissent."

"A chilling message has gone out across America: Dissent if you must, but proceed at your own risk."

It's ongoing in Washington. Legitimate protesters are considered enemies of the state.

Divergence from the official narrative is at risk of being criminalized

During Obama/Biden's tenure, the Center for Constitutional Rights said the following:

"The growing threat to the right to dissent has been demonstrated in the US government's efforts to silence speech, and criminalize and target peaceful movements," adding:

"These efforts are becoming more aggressive, emboldened further by the Supreme Court's increasingly conservative decisions, for instance regarding material support in the form of humanitarian aid to so-called terrorist organizations."

Diverging from the official narrative increasingly is considered a threat to national security.

"(I)f there is a bedrock principle underlying the First Amendment, it is that government may not prohibit the expression of an idea simply because society finds the idea offensive or disagreeable."

Justice Thurgood Marshall once said: "(A)bove all else, the First Amendment means that government has no power to restrict expression because of its message, its ideas, its subject matter, or its content."

Separately he said: "If the First Amendment means anything, it means that a State has no business telling a man, sitting alone in his own house, what books he may read or what films he may watch. Our whole constitutional heritage rebels at the thought of giving government the power to control men's minds."

In 2017/18/and 19 congressional sessions, the Domestic Terrorism Prevention Act was introduced but not passed by both houses of Congress.

Durbin is using the January 6 anti-Trump Capitol Hill false flag as a pretext to more greatly assault free expression and other freedoms in the US than already.

"After the attack on the Capitol, I hope that Congress can finally come together and do something to address (the) threat" of domestic terrorism, he said.

Notably since the 9/11 mother of all false flags, invented domestic terrorism has been used as a pretext for waging war on a free and open society — totalitarianism replacing it.

According to Durbin, legislation he'll introduce calls for establishing government offices at the DOJ, FBI and DHS — on the phony pretext of preventing future incidents like what happened on January 6.

"It would require these offices to regularly assess the domestic terrorism threat," he said.

If enacted into law, it'll be another nail in the coffin of disappearing freedoms in the US — by targeting  for elimination what free and open societies hold dear.

When dissent is redefined as terrorism, censorship becomes the new abnormal, along with totalitarian rule.

Biden falsely blamed pro-Trump elements for what happened on January 6, calling them domestic terrorists and insurrectionists — a gross perversion of reality.

What happened on Capitol Hill was all-about slamming Trump for what he had nothing to do with.

It was to push the envelope for denying him a run for a second term in 2024.

It was to permanently smear him for invented reasons, ignoring justifiable ones.

It was to ease Biden/Harris' transition to power, enabling them and a Dem-controlled Congress to more greatly wage war on fundamental freedoms.

Earlier I called the Capitol Hill incident America's Reichstag fire. What followed in its wake needs no elaboration.

In response to earlier congressional introduction of the Domestic Terrorism Prevention Act, the ACLU said the following:

It'll "double down on an already flawed domestic terrorism framework" that's been used to crack down on invented domestic threats.

"This bill codifies authorities and actions of national security and counterterrorism components of the (DOJ and DHS), authorizing domestic terrorism units or offices to monitor, investigate, and prosecute incidents of (alleged) domestic terrorism" — that's likely to be invented, not real.

"These kinds of government abuses are not new, and they are ongoing."

They've been around throughout the republic's history.

Hardening them over time is especially worrisome.

At risk is eliminating free and open expression, along with other fundamental freedoms that are too precious to lose.

The ACLU stressed that the proposed legislation "would not only entrench a system that lacks meaningful oversight, transparency, and legitimate standards, but also (will) codif(y) a framework that is used to target and discriminate against the very communities Congress (pretends) to protect."

The measure is a further assault on a free and open society — already threatened by other police state laws.

If enacted into law, it'll hasten the arrival of tyranny instead of all-out efforts to prevent it.