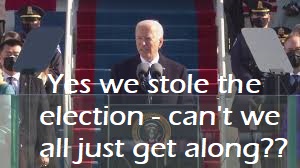 Truth-telling historians will long remember January 20, 2021 in America as a day of infamy.

Unelected Biden/Harris were sworn into office as legitimate Election 2020 winner Trump was en route to Florida aboard Air Force One for the last time.

Establishment media fawning in lieu of national mourning over unelected Biden/Harris is in stark contrast to unrelenting Trump bashing for the wrong reasons likely to continue against him in some form ahead.

Following shame and sham in the US capital Wednesday, virtual Biden/Harris press agent NYT defied reality with the following blazing headline in its day after edition, deceptive claiming:

"DEMOCRACY HAS PREVAILED (sic) (as) Biden takes office as 46th (US) president."

A litany of mass deception followed.

Echoing deceptive inaugural address remarks delivered by Biden's double because he's too cognitively impaired to express more than sound bites in public, the Times called the delivered message "sanguine" during the Greatest ever US Main Street Depression that's likely to fester and worsen ahead for ordinary Americans while super-rich ones grow richer by exploiting them.

Exuding unjustifiable praise for Biden/Harris by the Times was accompanied by more Trump bashing with no mention of legitimate DJT wrongdoing during his tenure.

The post-inaugural Times edition is an undisguised commercial for the incoming regime — polar opposite what journalism is supposed to be.

Along with the editorial board's mass deception, an extended eulogy by other Times propagandists were featured.

"Harris makes history as the highest-ranking woman in the US" was a featured article about the first Black vice president.

The Times said featured photos were "from an inauguration day like no other…to show Americans and the world that democracy would endure (sic) despite" — its nonexistence in Police State America.

Other fawning all over Biden/Harris-Trump bashing featured a further array of mass deception reports including:

"On Day 1, Biden Moves to Undo Trump's Legacy" — by going beyond the worst of his domestic and geopolitical agendas.

Biden issues blizzard of "executive orders and other directives"

"Washington Breathes an Uneasy Sigh of Relief (sic)" — during a changing of the guard to produce worse times ahead, not positive change for ordinary Americans

"For Kamala Harris, an Influential Voice and a Decisive Vote" — a disturbing figure chosen to replace Biden when too cognitively far gone to continue on the job

" 'A Total Failure:' The Proud Boys Now Mock Trump" — expect no end to Trump bashing for some time, part of wanting him to be too damaged goods to consider running again for office if permitted

"The Biden Opportunity" — for the military, industrial, security complex, Wall Street, other corporate favorites, and plotters of hardened tyranny ahead

Joe Biden is about to find out."

The US has always been and continues to be governed of, by, and for the privileged few at the expense of the great majority.

"Good Riddance, Leader McConnell" — his undemocratic Dem replacement to exceed the worst of how he betrayed ordinary Americans in deference to privileged ones.

There's more in the Times day after edition besides all of the unfit to read rubbish.

Imagine what's coming ahead by establishment media — perpetual gushing over Trump's unelected successor while bashing him at every opportunity and concealing the worst of what's certain to unfold ahead.

Instead of the best of times to look forward to, hardened dystopia is virtually certain with nary an explanation from Big Media to continue their press agent services for a regime with no legitimacy.