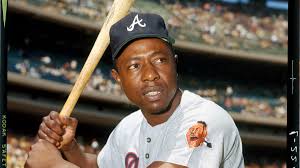 On January 22, legendary baseball Hall of Fame home run king Hank Aaron reportedly died in his sleep — no cause of death given so far.

More below on the loss of a figure Sports Illustrated said "transcended baseball like few ever did or will."

He was bigger than life on and off the field as a giant of the game and humble human being.

Mohammad Ali called him "(t)he only man (he) idolized more than" himself.

He was a sports giant giant I remember well from his playing days.

Growing up in Boston, I missed seeing him in person with the Braves that moved from the city to Milwaukee in 1953, before Aaron joined the team a year later.

His storied career began in the Negro Leagues around five years after Jackie Robinson became the first Black major league baseball player with the then-Brooklyn Dodgers.

I recall seeing him play against the Boston Braves in the late 1940s and be booed by fans in the stands — not for being an opposition player, for the color of his skin.

Boston like countless other US cities remain racist to this day — but not in ballparks of all sports any longer where Black athletes are the biggest stars and main attractions.

Aaron transcended stardom to the measure of what he was as a man.

He began playing baseball as a shortstop.

The Milwaukee Braves called on him to play in his first major league game because of an injury to regular outfielder Bobby Thompson.

He played in more baseball all-star games (21) than any other player to this day.

He overcame racial hatred and rose to stardom through great skill as a player — combined with humility and grace as a man.

Though Bobby Bonds broke his career home run record and Babe Ruth — the first player to hit 60 homers in one season — was know as the Sultan of Swat, Henry/Hammerin Hank Aaron will be baseball's home run king for time immemorial.

From Mobile, Alabama sand lots to the Negro Leagues, then minors to the Majors in Milwaukee, then Atlanta, Aaron will always be one of the national pastime's most iconic figures.

A gifted player offensively and defensively, impressive statistics alone don't capture his importance to the teams he played on and communities where he lived — most prominently the Atlanta Braves in the peach state.

Calling him bigger than baseball, Sports Illustrated said he was "a beacon for civil rights, of humility and of honest work ethic, all qualities we associate with America at its best, not just in some sporting venture."

He was part of major league baseball for nearly a generation as an active player from 1954 - 1976.

I defer everything about what he accomplished on the field to sports analysts now recounting them at length.

He's remembered as the most transcendent player since Jackie Robinson broke the color line two years after WW II ended.

When Aaron broke Babe Ruth's single-season home run record — a historic sports moment I saw live on television and remember vividly as he circled the bases and was greeted joyously at home plate while fans were cheering — announcer Vin Skully reported the moment as follows:

"What a marvelous moment for the country and the world."

"A Black man is getting a standing ovation in the deep south for breaking a record of an all-time baseball idol."

"And it is a great moment for all of us, and particularly for Henry Aaron."

After achieving the moment at age-40, he addressed the crowd by microphone, saying:

After retiring on the field, he remained with the Braves organization as an executive involved in building its minor league system.

"He established Chasing the Dream, a foundation that provides grants to children age nine to 12 to seek advance study in arts, music, dance and sports," Sports Illustrated reported, adding:

"Graciousness always was an Aaron hallmark, as much as" what he accomplished" as a player.

A giant on the field of dreams and throughout his life now belongs to the ages.

Aaron was vaxxed for seasonal flu/renamed covid with Moderna's hazardous vaccine on January 5.

After his Friday death, no explanation of cause was reported.

After being vaxxed, he told AP News that he felt "wonderful," adding:

"I don't have any qualms about it at all."

All vaccines are hazardous to health and should be avoided — especially experimental, unapproved, fast-tracked, DNA altering covid ones.

Since mass-vaxxing began in the US, Europe, and elsewhere, thousands of adverse events were reported, including serious ones, along with scores of known deaths.

Was Hank Aaron's life cut short because he rolled up his sleeve to do what he thought was the right thing?

His "tragic death is part of a wave of suspicious deaths among elderly closely following administration of COVID vaccines."

"Instead, they dismiss injuries and deaths as 'unrelated' to vaccination."

"Public health advocates worry that the vast majority of injuries and deaths will go unreported to the Vaccine Adverse Events Reporting System (VAERS), the notoriously broken voluntary surveillance system run by the US Department of Health and Human Services (HHS)."

A 2001 HHS study concluded that "fewer than 1% of vaccine injuries" are reported to VAERS."

Aaron's family should order an autopsy to determine the cause of his passing — to be performed by trusted experts who'll explain accurately what took is life.

While at this time it's unknown, it's well known that elders aged-80 or older are especially vulnerable to ill effects from vaxxing because of their weakened immune systems.

Vaxxing may well be responsible for taking Aaron's life.

Everyone vaxxed for covid is playing Russian roulette with their health and lives — especially the elderly like Aaron.