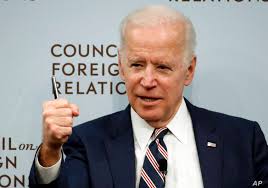 Russia was targeted last weekend by made-in-the-USA rent-a-mobs in Moscow, St. Petersburg and other cities — more of the same likely ahead.

Instead of extending an olive branch for improved bilateral relation, dirty business as usual took precedence.

Much the same in various forms is likely against China, Iran, Venezuela, and other nations free from US control.

That's how the scourge of US imperialism operates. No one is safe from its war on humanity anywhere worldwide.

Reportedly, it was to reinforce illegally established Pentagon bases east of the Euphrates River.

Instead of withdrawing US forces from the country as Trump once promised but never followed through on, is the Pentagon's presence in Syria being expanded?

On day one of Biden's term in office  began, another large-scale US military convoy entered Syria from Iraq.

"(A) convoy…of 40 trucks loaded with weapons and logistical materials, affiliated to the so-called international coalition have entered in Hasaka countryside via al-Walid illegitimate border crossing with north of Iraq, to reinforce illegitimate bases in the area."

"Over the past few days, helicopters affiliated to the so-called international coalition have transported logistical equipment and heavy military vehicles to Conoco oil field in northeastern Deir Ezzor countryside, after turning it into military base to reinforce its presence and loot the Syrian resources."

The Biden/Harris regime is infested with some of the same hawks responsible for launching aggression against Syria and Libya in 2011.

Is what's ongoing prelude for escalating war in Syria instead of ending what's gone on for the past decade that's been responsible for mass slaughter and destruction?

"The new US (regime) must stop acts of aggression and occupation, plundering the wealth of my country,   (and) withdraw its occupying forces, and stop supporting (ISIS and other jihadists), illegal entities, and attempts to threaten Syria's sovereignty, unity and territorial integrity."

"The American occupation forces continue to plunder Syria's wealth of oil, gas and agricultural crops, burning and destroying what it cannot steal."

The above remarks and similar ones when made fall on deaf ears in Washington.

US aggression in Syria continues with no end of it in prospect, the same true for Afghanistan, Yemen, and numerous other nations by illegal sanctions and other dirty tricks.

Since the US launched war on Syria a decade ago, Biden falsely blamed President Assad for US high crimes committed against the country and its people, along with illegitimately calling for him to step down.

It remains to be seen how Biden's agenda toward Syria unfolds ahead.

"Biden would recommit to standing with civil society and pro-democracy partners on the ground (sic)."

"He will ensure the US is leading the global coalition to defeat ISIS (sic) and use what leverage we have in the region to help shape a political settlement to give more Syrians a voice (sic)."

The US is committed to eliminating democracy wherever it exists, prohibiting it at home.

Instead of waging peace, it prioritizes endless wars of aggression in multiple theaters

ISIS, al-Qaeda, and likeminded terrorists groups were created by the US for use as proxy fighters in Syria, Iraq and elsewhere.

In December, the UN accused the US of obstructing Syria's ability to rebuild, along with enforcing illegal sanctions to suffocate its people into submission to Washington's will.

According to the UN, the US is running "roughshod over human rights, including the Syrian people's rights to housing, health, and an adequate standard of living and development."

What Obama/Biden began and Trump continued, Biden/Harris are likely to pursue — an agenda of endless US war on Syria and its long-suffering people, perhaps intending to escalate things ahead.

In response to Biden/Harris interventionism in Russian cities last weekend, China's Global Times accused the US of "hyping up the protests," adding:

"Just as global analysts have predicted, the (Dems) now in majority political power (are) not a good thing for Russia" or any other nations free from US control.

What happened last weekend shows that Biden/Harris are committed to "interventionism."

Dems "will not miss the opportunity to interfere in the internal affairs of Eurasia, or anywhere in the world."

He's committed to stopping…abuses on many fronts (sic), and the most effective way to do that is through working in concert with our allies and partners to do exactly that (sic)."

Under both wings of its war party, the US is committed to seek regime change in all nations unwilling to sell their souls to Washington.

He and dark forces in charge of directing his domestic and geopolitical policies are virtually certain to continue US war on humanity without letup ahead.