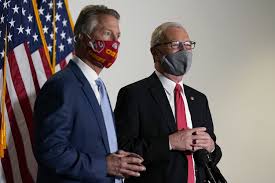 It's all about wanting him hung out to dry for partisan reasons — unrelated to the rule of law.

It reveals deep-seated undemocratic Dem contempt for the rule of law.

Throughout Trump's tenure, they savaged him for the wrong reasons consistently, ignoring legitimate wrongdoing to hold him accountable for because most congressional members share guilt.

The same goes for the corporate-owned fourth estate that long ago abandoned what journalism is supposed to be.

The US political system is too debauched to fix — a fantasy democracy from inception, it's intolerant of the real thing wherever it exists.

It's contemptuous of what just societies hold dear.

Long ago having abandoned the rule of law, governing is by the law of the jungle instead while pretending otherwise.

Only the ignorant and naive are fooled. Unfortunately they comprise a large segment of US society, perhaps a majority — brainwashed to accept what demands rejection.

The Constitution is unclear on whether a former president or other US official can be impeached and put on trial.

Constitutional experts disagree on this issue. While nothing in the document explicitly permits impeachment of a former US official, nothing rules it out.

If a former US official is convicted by a required two-thirds Senate majority, the ruling could be contested in federal court to the highest level.

If so, a Supreme Court majority would decide this issue, what hasn't happened so far.

Trump's Senate trial is all about wanting him prevented from seeking public office again.

It also aims to greatly humiliate him more than already that could backfire on Dems by exposing their chicanery.

Someone else will be chosen for the dubious task. Turley asked and answered the following questions:

"(W)ho is being tried. Is (Trump) a president? Obviously not."

"Is he a civil officer? No, he is a private citizen."

"A private citizen is being called to the Senate to be tried for removal from an office that he does not hold."

Turley cited congressional "opportunism" as a greater danger than holding a former US official justifiably or unjustifiably accountable by Senate trial.

"A new Congress with a new majority can seek retroactive impeachments and disqualifications for figures in an opposing party" — at any time for any reasons when they're private citizens to prevent them from ever holding public office again by separate majority vote.

By this standard, a future GOP controlled Congress could impeach and try Obama and Clinton, even 96-year-old Jimmy Carter if still living at the time.

Turley: A future Congress "could insist that there is no escaping impeachment by merely leaving office."

Turley also criticized what he called a "snap impeachment" of Trump — with no hearing, no chance for rebuttal by DJT or his counsel.

He stressed that while Trump's upcoming Senate trial may or may not be "extraconstitutional, it should (be) view(ed) as constitutionally unsound."

In discussing the above, Turley left unaddressed the issue of impeaching and trying Trump for inciting insurrection he had nothing to do with.

In 2012, Occupy Wall Street activists in US cities nationwide were wrongfully demonized as domestic terrorists.

Today it's dissenting from the official narrative. It's speech, media and academic freedoms.

It's a free and open society US dark forces want replaced by full-blown tyranny on the phony pretext of protecting national security at a time when the only threats to the nation are invented, not real.

The measure on whether to proceed with trial passed by a 55 - 45 margin — way short of a two-thirds Senate majority to convict.

Proceedings against Trump remain scheduled to begin on February 9.

Trump will be the only former US president to be impeached and tried twice — while in office and as a private citizen, both times on phony charges, not legitimate ones.

As things now stand, he'll be exonerated again next month.

The same judgment cannot apply to a nation of, by, and for privileged interests exclusively at the expense of most others — where the rule of law no longer exists.