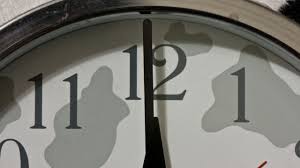 In its latest report, the Bulletin of Atomic Scientists (BAS) kept its Doomsday Clock at its closest level ever to armageddon at 100 to midnight.

"(W)e are now at the two-minute warning due to the man-made threats of climate change and nuclear war," said BAS director Rachel Bronson, adding:

Most disturbing is the "undermining of science and law-based approaches to solving major world problems and discarding of international agreements by influenti al leaders."

The threat (seasonal flu-renamed covid) occurs annually from around October to May.

Earlier it was without state-sponsored/media proliferated fear-mongering mass hysteria, lockdowns, quarantines, mask-wearing, and social distancing that caused infinitely more harm than what happens each year like clockwork.

The real threat is from manufactured economic collapse and erosion of freedoms — heading for eliminating them altogether.

Other major issues — that include US war on humanity at home and abroad — make today the most perilous time in world history.

If the ominous trend continues, free and open societies will be replaced by ruler/serf ones unfit to live in for most people.

That's where things are heading with no signs of abating.

Foundered by Albert Einstein and University of Chicago scientists in 1945, the annually set Doomsday Clock highlights "threats to humanity and the planet."

It's "a universally recognized indicator of the world's vulnerability to catastrophe from nuclear weapons, climate change, and disruptive technologies in other domains."

Things today are much more dire than a year ago by design of dark forces in the US and West, including a greater risk of nuclear war.

According to the BAS, "the potential" of what's unthinkable increased last year.

What the BAS and I call a new abnormal "tightened its grip…in the past year, increasing the likelihood of catastrophe."

The BAS largely addressed the threats of nuclear war and environmental disaster.

In my judgment, the greatest near-term threat is growing totalitarian rule in the US and West on a fast track toward full-blown tyranny, what the BAS left unaddressed and establishment media suppress.

The BAS stressed that "the existential threats of nuclear weapons and climate change) (that) have intensified in recent years because of a threat multiplier: the continuing corruption of the information ecosphere…"

It denounced the "wanton disregard for science…"

It failed to condemn virtual abolition of the rule of law in the West, along with exploitation of ordinary people by the US and other Western countries to benefit privileged ones.

The BAS called brazen US 2020 Election fraud a "conspiracy theory."

Nor did it explain that unelected Joe Biden is too cognitively impaired to handle duties of the office handed him by US dark forces.

Dubious "positive" steps by the Biden/Harris regime haven't "yielded substantive progress" toward a safer world. They haven't "move(d) the Clock away from midnight," the BAS admitted.

It failed to explain that the new regime continues dirty business as usual like its predecessors.

Its hostility toward Russia, China, Iran, and other invented enemies risks unthinkable war against one or more of the above.

It's because of US rage for dominance over planet earth, its resources and populations.

Based on cited reasons, BAS Science and Security Board Members kept "the Doomsday Clock at 100 seconds to midnight, the closest it has ever been to civilization-ending apocalypse…"

Left unexplained is that Russia, China, Iran and other nations are forced to upgrade their military capabilities because of US threats to their security.

Failing to act defensively would be irresponsible. Worse still, perceived weakness incentivizes US aggression to gain other imperial trophies.

Calling its lawful actions under JCPOA Articles 26 and 36 "another serious concern" ignored Iran's legitimate nuclear program with no military component and no evidence of an intention to seek one.

The BAS falsely praised what it called Biden's "desire to rejoin the Iran nuclear deal."

At this time, as publicly stated and likely to remain hard-wired US policy, rejoining the landmark agreement depends on Iran's willingness to accept unacceptable US demands — ones it rejects.

The BAS falsely accused Iran of "reducing (its) amount of time…to put together a nuclear weapon from one year to several months."

Ignored was Tehran's sworn opposition to these weapons.

There's no evidence refuting the above, plenty supporting it.

The BAS also falsely claimed that "Iran's willingness to remain in the agreement is not a given."

Its ruling authorities very much want the JCPOA preserved. At the same time, if the US and E3 countries remain in noncompliance, the agreement will dissolve.

It cannot endure unless all its signatories comply with its provisions, especially the US. That's very much not the case now.

The BAS also failed to explain that Iran prioritizes peace, stability, cooperative relations with other nations, and adherence to the rule of law.

It's in stark contrast to US wars on humanity at home and abroad — together with its imperial partners.

If nuclear war occurs ahead, it'll be made-in-the-USA against one or more nations on its target list for regime change.

The US bears full responsibility for advancing the Doomsday Clock to and maintaining it 100 seconds to midnight — together with its belligerent imperial partners.

Falsely saying seasonal flu-renamed covid caused "the worst pandemic in a century" by the BAS ignores that global outbreaks, hospitalizations, and deaths are similar to what occurred in most earlier years.

No evidence indicates that the Biden/Harris regime will "show leadership by reducing US reliance on nuclear (and other) weapons via limits on their roles, missions, and platforms, and by decreasing budgets accordingly."

Polar opposite is virtually certain.

The same is true about possible US first strike use of nuclear weapons.

Obama/Biden's 2010 and 2015 National Security Strategies pledged US first-strike use of these weapons against any adversary, nuclear armed or not.

Trump vowed and implemented a policy of "greatly strengthen(ing) and expand(ing) the US nuclear capabilities."

It's virtually certain that Biden/Harris will continue this policy along with US war on humanity.

They escalated it straightaway at home by pushing harmful to health mass-vaxxing.

It's likely to be followed by requiring vaccine passports for access to public places.

Both right wings of the US war party pose an unparalleled threat to most everyone everywhere.

Looking ahead, things are far more likely to worsen than improve.

The dystopian Great Reset new world order US dark forces and their co-conspirators seek is catastrophic to the rights and welfare of ordinary people everywhere.

With the Spanish civil war as its backdrop, Hemingway wrote "For Whom the Bell Tolls."

In times of forever wars by hot and other means by the US at home and abroad, it tolls for thee.