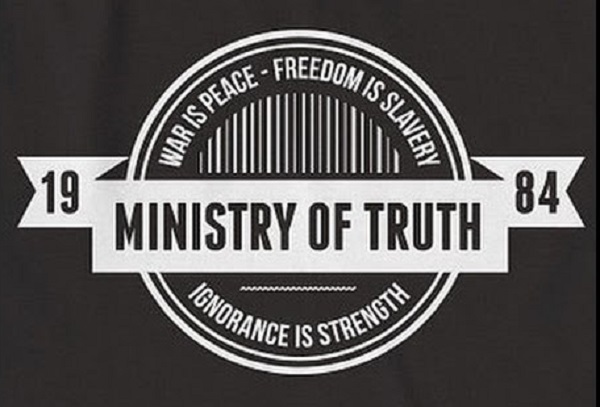 NYT Audacity: Calling for a US Ministry of Truth

It's a notion long ago abandoned in deference to providing press agent services for powerful interests.

At the same time, the Times finds new ways to disgrace itself.

Calling for a US Ministry of Truth headed by a "reality czar" sounds ominously like what Orwell described in his dystopian "1984" novel that's no longer fiction, saying:

"These contradictions are not accidental, nor do they result from from ordinary hypocrisy."

"They are deliberate exercises in doublethink."

Along with Big Brother mass surveillance and newspeak, Orwell's Ministry of Truth was all about controlling the message, eliminating whatever conflicts with it, memory holes used for this purpose.

The Times and other US major media operate this way now — a collective ministry of truth as described above.

Featuring the official narrative exclusively, alternative views are filtered out and suppressed, free and open expression banned in their reports.

In "1984," unnwanted material went down memory holes to "be whirled away (in) enormous furnaces…devoured by the flames," said Orwell, adding:

"(T)here were the directing brains who co-ordinated the whole effort and laid down the lines of policy which made it necessary that this fragment of the past should be preserved, that one falsified, and the other rubbed out of existence."

In the US and West, no Orwell-style memory hole is needed, no furnaces, no ceremonial book-burnings.

Big Media in cahoots with diabolical government officials censor and eliminate truth-telling on what's vital for everyone to know.

What it called "the scourge of hoaxes, lies and delusions" are hard truths about US imperial wars, hazardous covid vaccines to be shunned, stolen Election 2020, unelected/cognitively impaired Biden unable to serve in any public capacity, the anti-Trump Jan. 6 Capitol Hill false flag, and other cutting-edge issues.

What the self-styled newspaper of record calls "misguided beliefs" are indisputable facts important for everyone to know.

A real "national reality crisis" exists because of Big Government in cahoots with Big Media - like the Times — serving privileged interests exclusively at the expense of most others.

It's because of US police state totalitarian rule on a fast track toward full-blown tyranny.

It's because the US no longer is open, free, and fair.

It's because hardline government is the mortal enemy of ordinary people — their health, well-being, safety, and fundamental freedoms being eliminated in real time.

It's because of US war OF terrorism, not on it, rages against ordinary people, wanting them exploited to serve privileged interests.

It's because America is no longer safe and fit to live in for most of its people.

It's because of the largely ignored greatest ever US Main Street Great Depression while wealth, power, and privileged interests never had things better.

It's because media like the Times suppress what's crucial for everyone to know.

What the Times called "violent extremism" is state-sponsored.

What it calls a "truth commission" reflects shades of "1984."

What it calls "domestic terrorists" are FBI, CIA, DHS, local police, and other elements of oppression to cow ordinary people into submission to a diabolical higher power in Washington.

Truth-telling as it should be is polar opposite how the Times and other establishment media operate.

As a collective lying machine, truth-telling is their moral enemy, what they're hellbent for eliminating in whatever form it shows up.

That's the ugly reality suppressed by the Times and other Big Media.

The nation I grew up in long ago no longer exists.

That's the ugly reality establishment media like the Times suppress — to their disgrace.