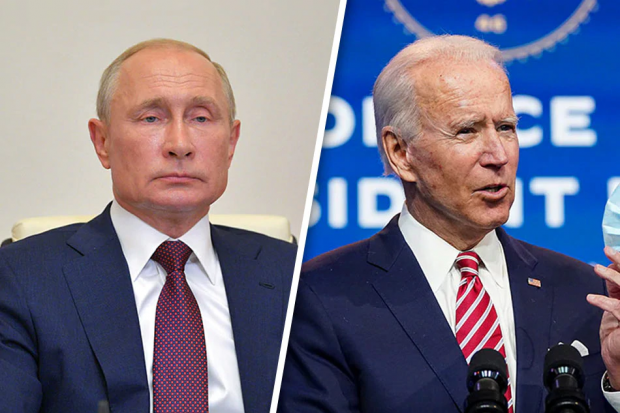 US Hostility Towards Russia Unchanged Under Biden

US war by hot and/or other means rages against all nations free from its control — notably against China, Russia and Iran.

During his Thursday address, Biden signaled continued US dirty business as usual against invented enemies — not a new course toward cooperative relations with other countries.

He falsely accused China and Russia of "advancing authoritarianism…to damage and disrupt our 'democracy (sic),' " adding:

"(T)he days of the United States rolling over in the face of Russian aggressive actions (sic), interfering with our elections (sic), cyberattacks (sic), poisoning its citizens (sic) are over."

"We will not hesitate to raise the cost on Russia and defend our vital interests and our people, and we will be more effective in dealing with Russia when we work in coalition and coordination with other like minded partners."

Aggression and other dirty tricks reflect how US ruling regimes operate.

Under Vladimir Putin, Russia is governed by higher standards, ones the US and its imperial partners long ago abandoned.

The same goes for China, Iran, and other nations the US seeks to transform into pro-Western vassal states.

The more forcefully it tries, the more greatly its decline is hastened, the sooner it arrives in history's dustbin where it belongs.

It's long past time for the Kremlin to abandon diplomatic outreach to hegemonic USA that's hellbent for eliminating its sovereign independence.

Toughness is the only language the US understands.

Giving it a taste of its own medicine is the only way to counter its hegemonic rage for dominating other nations.

"In compliance with the Vienna Convention on Diplomatic Relations of April 18, 1961, 'diplomats' who took part in unauthorized rallies have been declared persona non grata."

They're hostile toward Moscow and "must leave Russia as soon as possible."

"The Russian side expects that" these nations and officials respect Russia's sovereign rights and the rule of law.

Russian Foreign Ministry spokeswoman Maria Zakharova called on these and other nations to cease "meddl(ing) in the internal affairs of a sovereign state."

Sweden's Foreign Ministry's said it "considers this entirely unjustified (sic), which we have also conveyed to the Russian side."

"The ministry regrets Russia's actions and reserves the right to take appropriate measures in response."

Poland's Foreign Ministry said it "reserves the right to take adequate steps," in response — vowing to expel a Russian diplomat.

German Chancellor Angela Merkel falsely called Russia's action "a step away from the rule of law," suggesting a retaliatory action to follow.

Russia's Foreign Ministry slammed what it called a "coordinated global campaign to contain Russia and interfere in its internal affairs."

Suggesting US dirty hands behind it, Zakharova said Moscow intends having "a serious talk" with Biden regime officials on the issue.

"Today we simply bogged down in a topic that for some reason the West is now trying to sideline, focusing all of its attention on protests and demonstrations in the Russia."

"I am referring to the topic of finding the truth about what happened to Navalny and when and where it happened."

Despite "numerous requests" by Russia to Germany, France, Sweden and the OPCW for information they have on Navalny's illness, "(t)hey just won't give us any answers," said Lavrov — calling their behavior "categorically unacceptable."

"This is very aggressive and unconstructive rhetoric, to our regret."

"We have already said that we will not heed such statements, which are some kind of mentoring lectures."

US hostility toward Russia and other nations free from its control is unbending, diplomatic outreach by their ruling authorities to their US counterparts a waste of time.

Throughout the post-WW II period, the US waged endless wars by hot and/or other means on nations unwilling to subordinate their sovereign rights to its interests.

Looking ahead under Biden/Harris and whatever US regimes succeed them, no evidence remotely suggests a new leaf turned for cooperative relations with these countries over endless confrontation.