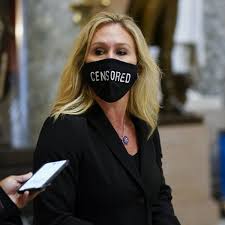 Instead of exposing and denouncing 2020 election rigging for Biden over Trump, establishment media cheerled the outcome.

They've been hostile toward everything Trump related and his supporters.

Instead of slamming what happened to Rep. Marjorie Greene and Fox News host Lou Dobbs, they expressed support the constitutional breach of their First Amendment rights.

The hostile to truth and full disclosure NYT slammed Greene as an "QAnon congresswoman, a far-right influencer and gun fanatic who dabbles in anti-Semitism and anti-Muslim bigotry," followed by a further litany of over-the-top remarks that were all about her support for Trump.

According to WaPo, the Times, and other Big Media, Trump supporters are crackpot right-wing extremists for daring to challenge the official narrative — especially about the 9/11 mother of all US state-sponsored false flags, its imperial wars, and 2020 election rigging for Biden over DJT.

The Times called what led to stripping her of committee assignments "another chapter in an ongoing story: the two-step between the far right and the Republican Party and the degree to which the former is never actually that far from the latter."

Ignored by the Times and other Big Media is that both wings of US one-party rule are hostile to an open, free society — undemocratic Dems outdistancing Republicans on issues related to warmaking on humanity at home and abroad.

Support by most GOP "colleagues (is) one more sign of the…morally adrift party."

"Thursday's vote should never have had to happen."

"Republicans should have had more self-respect than to support her last year, to welcome her with full honors and to allow the situation to escalate as it did."

If Greene was anti-Trump, pro-Biden/Harris, demonizing articles about her by WaPo and the Times never would have been written.

In typical Times disinformation fashion, it called his program a "clearinghouse for baseless theories of electoral fraud in the weeks after Mr. Trump lost the 2020 presidential race (sic)."

There's nothing "baseless" about indisputable election fraud — supported by the Times instead of exposing and denouncing it.

The Times cited an unnamed source — that may or may not exist because of dubious anonymity — allegedly saying:

Reached by WaPo text message on Friday, Dobbs said he had "no comment at this time."

Until the unacceptable lawsuit is resolved, his lawyer(s) surely advised against commenting on the issue publicly.

Dirty tricks have been longstanding in US federal, state and local elections since at least the early 19th century.

Today's sophisticated software makes losers winners and the other way around with nary a fingerprint to trace.

Throughout his time in office, Trump has been wrong on one issue after another.

On all things Election 2020, he's right brazen fraud that deprived him of another term.

History one day will set things straight when it's too late to matter except for the official record.

Biden/Harris entered office illegitimately — selected, not elected on January 20 while winner Trump was en route to Florida aboard Air Force One for the last time.