On the afternoon of February 1, 2008, I was stopped yet again at a suspicionless internal Homeland Security checkpoint on SR86 in Southern Arizona near mile post 146.

The location is over 40 miles North of the border and this was the fifth time in three weeks I've been stopped & seized at this checkpoint absent reasonable suspicion: 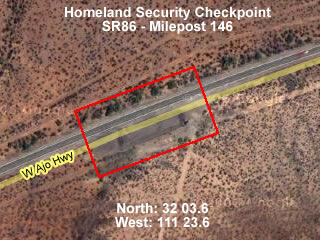 Normally, there are three or four agents manning the checkpoint with two patrol vehicles parked nearby. This time the scenario were dramatically different. A YouTube video of the seizure is available below:
And a downloadable Windows Media File is available here.

Present were no less than twelve agents visible at any given time along with six Homeland Security vehicles lining the entry to the checkpoint. There was also a large United States flag flying over one of the trailers - something that hasn't been present in the past: 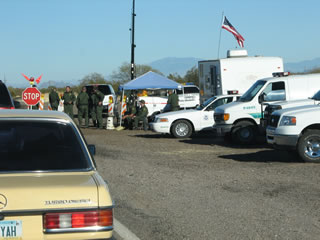 Perhaps the agents were hoping the large American flag would somehow mask their un-American activities.

As I first came to a stop at the checkpoint, several agents converged on my vehicle and one can be heard pounding on the truck near time marker 01:15. About nine seconds later, another agent to the rear of my vehicle can be heard yelling, Hi Terry. This of course clearly indicates the agents knew who I was and, by extension, that I wasn't an illegal alien. Nonetheless, thy continued to detain me for several minutes in order to harass and intimidate.

As the suspicionless seizure of my person continued, several Homeland Security agents can be seen waving at me near 02:09: 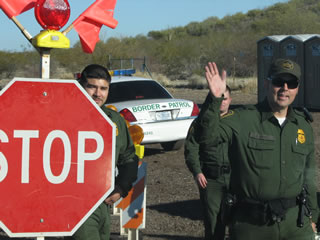 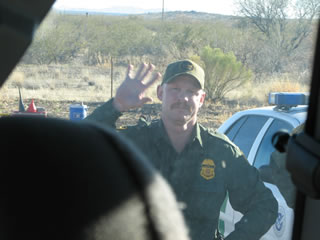 While several high(er) ranking agents can be seen near 02:13 standing in the background looking on with apparent satisfaction (insignia can be seen on higher resolution photos): 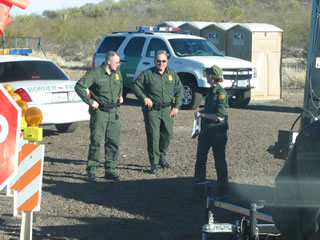 Whether or not they were also onscene to make sure things didn't get out of hand during this staged confrontation is unknown.

As time progressed, another agent wearing blue 'inspection' gloves and carrying a sprint camera phone (service issue?) can be seen walking around the vehicle methodically taking photographs. His name tag indicates he was Agent J. Gonzalez: 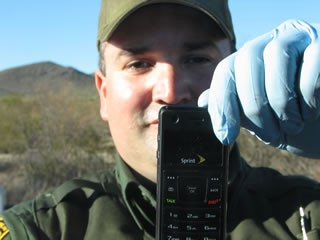 The tags appear to be attached with velcro however and easily removed. As such, I give little credence to the validity of a name displayed on a tag - especially when the agents refuse to verify their identity when requested.

Near 02:39, one of the agents who initially waved at me can be seen shaking hands with another agent: 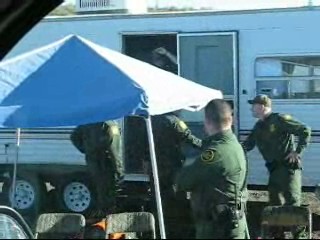 Finally, near 03:22, the same agent who yelled my name during the initial stop, also yelled, Bye Terry, after I was finally given permission to go on my way after Homeland Security finished having its fun.

I also note the stopping agent, 'K. June', refused to face me after directing me to stop. Perhaps she was ashamed of her handy work. Instead, she pressed herself up against the cab of the vehicle between the two side doors just out of view. This was the same agent who stopped me on January 8th and during a night stop with drug dogs on January 23rd. What's also interesting to note is that a different agent was stopping traffic at the checkpoint when I first entered. Several Cars were in front of me and by the time I rolled up to the stop sign, Agent June had replaced the male agent.

Another male agent also played hide and seek while pressing himself up against the passenger side of the cab between the front and rear doors: 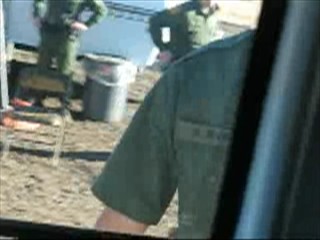 Approximately thirty minutes after I passed through the checkpoint, only four or five agents remained on-scene to conduct operations. This means the rest of the gang with guns left the scene shortly after the staged show of force ended and I left the area.

While watching the video, consider the lack of professionalism displayed by these Border Patrol agents at every level. These are the same agents who have been empowered with an extraordinary level of unfettered field discretion to stop, seize and detain individuals based upon no reasonable suspicion whatsoever.
Also ask yourself how much illegal traffic crossed the border forty miles to the South of this checkpoint while twelve Homeland Security agents played domination games along a public highway that never intersects the border at any point.

The 4th amendment was specifically created to protect us against this type of arbitrary activity by over-reaching federal agencies. It would appear however that the writ of assistance is alive and well in modern day America and anyone is eligible for suspect status for no reason whatsoever.

Far from increasing the security of the country, these checkpoints serve as little more than obedience training for the burgeoning American police state.
Welcome to Checkpoint USA.