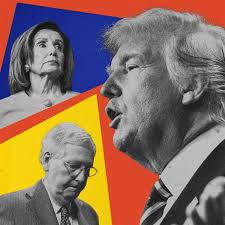 Twice in office, Trump was impeached on phony charges.

In February last year, he was tried and acquitted by the Senate on fabricated abuse of power and obstruction of Congress charges.

On January 13, he was impeached again on the phony charge of "engag(ing) in high crimes and misdemeanors by inciting violence against the government of the United States (sic)," adding:

He "gravely endangered the security of the United States and its institutions of government (sic)."

Not a shred of credible evidence supports the earlier or current accusations.

Targeting him then and now were and remain politicized by undemocratic Dems.

Pelosi, Schumer and their co-conspirators should be on trial for abuse of power.

Exoneration of Trump a second time is the only option.

With a required two-thirds Senate super-majority required to convict, it's highly unlikely.

All but five Republicans in the body back him, opposing earlier and current phony charges against him.

No evidence suggests that he incited insurrection on Capitol Hill as the phony charge claims.

Law Professor Jonathan Turley slammed what he called a "snap impeachment" of Trump — with no hearing, no chance for rebuttal by DJT or his counsel.

Turley stressed that while Trump's Senate trial may or may not be "extraconstitutional, it should (be) view(ed) as constitutionally unsound."

Trials based on phony charges are constitutionally illegitimate.

If NYT presstitutes had their way, Trump would be declared guilty by accusation, case closed.

"The story of the president's actions is both riveting and horrifying (sic)."

"We think that every American should be aware of what happened — that the reason he was impeached by the House and the reason he should be convicted and disqualified from holding future federal office is to make sure that such an attack on our democracy and Constitution never happens again (sic)."

Dark forces behind January 6 Capitol Hill events should be on trial, not Trump.

Raskin's remarks — supported by other undemocratic Dems, the Times and likeminded Big Media — are polar opposite truth and full disclosure — notions they abhor and shun.

Besides the fake inciting insurrection charge, the Times piled on more.

It falsely claimed that "Trump tried to steal the election (sic)…attack(ed) democracy (that doesn't exist), and that he's responsible for what it falsely called "death and desecration" on Capitol Hill (sic), adding:

"There's more than enough in the public record to convict him (sic)."

Credible evidence debunks Big Lies by the Times and other long ago discredited Big Media.

According to WaPo-think, innocence is no defense.

"(T)he right vote is for conviction (sic)," its hostile to truth-telling, equity and justice editors roared.

Elements involved in storming Capitol Hill were Trump opponents, not supporters — what I earlier called a bussed in rent-a-mob of hooligans.

The Times, WaPo, and other Big Media have been hostile toward Trump throughout his tenure and as a private citizens for wrong reasons — consistently ignoring justifiable ones.

What's going on in the US since early last year to the present day is the darkest chapter in the nation's history.

It's likely prelude for much worse to come in the aftermath of dust settling on Trump's sham trial that's virtually certain to end with exoneration a second time around.

The vast majority of Americans aren't as fortunate.

Their agenda is all about wanting what's left of a free and open US society eliminated — hardline dystopian rule replacing it.

That's the hard truth about what's coming without mass resistance to challenge what no one wanting to breathe free should tolerate.