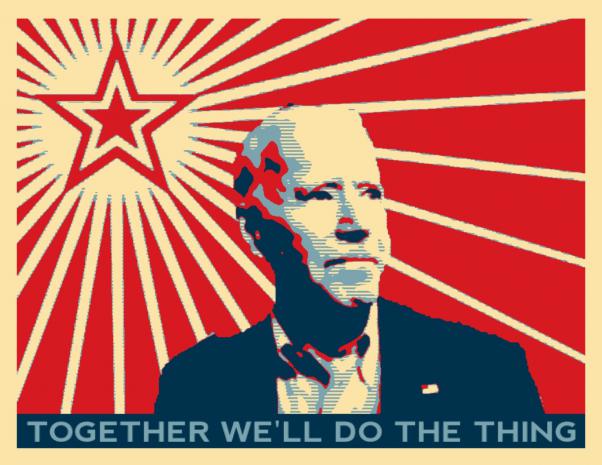 There was nothing remotely open, free, and fair about US Election 2020.

Honest historians one day may call Trump v. Biden the most brazenly ever manipulated outcome of a US presidential election.

Rigging elevated loser Biden to the highest US office over winner Trump.

What happened was likely the most sordid political chapter in US history.

As long as they remain in office, Biden/Harris have no legitimacy.

According to Time magazine, a deep state conspiracy made Biden a puppet president for powerful interests.

In 1991, master spider/trilateralist David Rockefeller thanked the "Washington Post, The New York Times, Time Magazine and other great publications whose directors have attended our meetings and respected their promises of discretion for almost forty years," adding:

"It would have been impossible for us to develop our plan for the world if we had been subject to the bright lights of publicity during those years."

"But, the work is now much more sophisticated and prepared to march towards a world government" — part of the diabolical Great Reset plan for ruler-serf societies worldwide.

"The supranational sovereignty of an intellectual elite and world bankers is surely preferable to the national auto-determination practiced in past centuries."

Under rules favored by Rockefeller and other dark elements like him, free open and free societies are to be replaced by top down governance, democracy where it exists extinguished, fundamental rights for everyone eliminated.

Trump was an obstacle to the scheme so he had to go.

Cognitively impaired Biden is ideal for the path he was chosen to pursue — a figurehead president controlled by others, decisions made for him.

Huge crowds for Trump's addresses compared to scant numbers for Biden showed that if Election 2020 was open, free, and fair, DJT might have won by a landslide.

Reinventing post-election events, Time falsely claimed that "jubilation (sic)" followed the outcome "as people thronged cities across the US to celebrate the democratic process (sic) that resulted in Trump's ouster (sic)."

Reality was and remains polar opposite the above mass deception.

There was nothing surprising about anti-Trump sentiment by Big Media, Wall Street, and other monied interests.

They have bigger fish to fry than expressing thanks to Trump for enriching them throughout his tenure — at the expense of exploited ordinary people.

Time acknowledged that "(t)here was (an anti-Trump) conspiracy unfolding behind the scenes" in the run-up to and after Election 2020 in support of Biden.

What went on resulted from an "alliance between left-wing activists and business titans."

"The pact was formalized in a terse, little-noticed joint statement of the US Chamber of Commerce and AFL-CIO published on election day."

"Both sides would come to see it as a sort of implicit bargain" for Biden over Trump.

"The handshake between business and labor was just one component of a vast, cross-partisan campaign to" replace him.

"Their work touched every aspect of the election."

"They got states to change voting systems and laws and helped secure hundreds of millions in public and private funding."

The fix was in. Biden was chosen unelected-president-elect long before election day.

Dems, complicit Republicans, and other dark forces made sure things went as planned.

On Election Day 2020, fantasy democracy triumphed over the real like always before.

So-called anti-Trump "democracy campaigners" made sure the real thing never had a chance.

It was all over long before voters went to the polls and mail-in ballots began arriving.

Election 2020 wasn't "save(d)." It was debauched, the will of the people denied.

When US elections are held at federal, state, and local levels, voters have no say over who holds high office.

Governance of, by, and for everyone equitably is the stuff of Hollywood films, made-for-television ones, and bad fiction.

Realpolitik is worlds apart from the above.

Trump was replaced for not being predictable.

Easily manipulated Biden is why he holds the nation's highest office.

Honest reporting would expose and defeat it.

Dishonest media were complicit in elevating loser Biden to the nation's highest office over winner Trump.

If successful, free and open Western and other societies will be replaced by full-blown tyranny on the phony pretext of protecting national security for our own good.