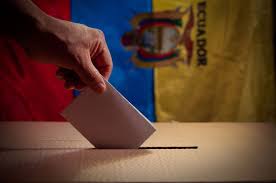 On Sunday, Equadorians voted for a successor to imperial tool president Lenin Moreno.

Instead of fulfilling campaign pledges to continue Rafeal Correa's populist agenda, he went the other way.

Selling his soul to Washington, he force-fed neoliberal harshness on ordinary Ecuadorians, betraying them in the process.

In return for $4.2 billion in blood money from the loan shark of last resort IMF, he sold out Julian Assange to UK captivity in cahoots with Trump regime hardliners.

Ahead of new elections, his approval raging plunged to single digit support. He's Ecuador's most unpopular leader in modern memory.

Correa protege Andres Arauz finished well ahead of other candidates but short of a majority needed to win.

When polls closed Sunday, the contest between banker Lasso and environmental activist Perez was too close to call.

After the above results were announced, Perez said he won enough support to compete with economist Arauz in a second round, saying:

"We've come with a plan to hold a vigil, in an active and respectful manner, but to defend the will of the vast majority of Ecuadoreans who see hope for a change."

Ahead of Sunday's election, protesters in Guayaquil, the country's largest city and main port, demanded a return to social democratic governance similar to what Correa provided.

He governed tyrannically, not democratically — waging war on social justice and critics.

According to a UN University study, nearly 60% of Ecuadorians are impoverished, nearly 40% enduring extreme poverty.

Officially it was 13.3% nationwide, 22.8% in the capital Quito last year. Most likely it's much higher and most employed Ecuadorians earn poverty or sub-poverty wages.

Based on polling data, he's strongly favored to become Ecuador's next president.

Candidate Moreno made similar progressive promises, then went another way in office.

If elected in April, what's likely at this time, it remains to be seen whether Arauz will follow through on promises made.

Like ordinary people everywhere, Ecuadorians need and deserve equitable governance, not the other way around by self-serving monied interests.

According to a Mint Press report, days before Sunday's election — with four months remaining in Moreno's tenure — his hardline regime in cahoots with "right-wing elitists are…scrambling to privatize the country's central bank" for ironclad control of Ecuador's money, the supreme power over all others.

What's going on is "unconstitutional" but could happen unless challenged and stopped.

According to Mint Press, privatizing the central bank "would open the floodgates for billions of dollars to be transferred to places like Panama and other tax havens."

"It would, in effect, force an already crumbling public sector to subsidize the capital flight."

It'll "prohibit" issuance of government bonds, "forcing authorities to increase the foreign debt during the current economic and health crisis."

Private interests will benefit over the public welfare.

Moreno's term expires in May. His successor, if Arauz, will have no easy task undoing with the economic, social, and rule of law wreckage he caused.

Knife-Edge Election to Decide Whether Ecuador Stays a U.S. Ally