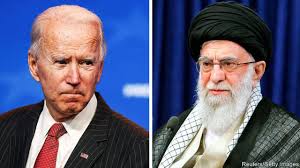 Like his predecessor, Biden and hardliners surrounding him invent reasons to bash Iran unjustifiably.

On Monday, multiple rockets struck a Pentagon airbase in Erbil, Iraq, killing a US contractor and wounding nine others, at least one individual in critical condition.

A group called Saraya Awliya al-Dam claimed responsibility for the attack, saying it targeted the "American occupation" in Iraq, adding:

The Americans "will not be safe from our strikes in any inch of the homeland, even in Kurdistan, where we promise we will carry out other qualitative operations."

According to the area's Kurdistan Regional Government (KRG), the incident was a "big security breach and major failure for all the main Kurdish security agencies," adding:

"How the rockets entered the region remains unclear, but it is possible that personnel within the Kurdistan region's security and military force may have collaborated with the perpetrators."

Popular Mobilization Forces in Iraq denied that any of its militias were responsible for what happened.

Was the incident carried out by Iraqi elements opposed to unacceptable US occupation or was it a Biden regime/CIA false flag to wrongfully blame Iran for what happened?

"(W)e've seen these attacks in the past. We've seen Iraqi militia, Iranian-backed militia in many cases, be responsible," adding:

The Biden regime will "investigate and hold accountable those responsible."

In response, Iran's Foreign Ministry spokesperson Saeed Khatibzadeh slammed what he called "suspicious rumors" that link the Islamic Republic to what it had nothing to do with, adding:

"Iran not only strongly rejects these rumors, but also flatly condemns suspicious attempts to attribute the attack to Iran."

"Iran regards stability and security of Iraq as a key issue for the region and neighbors, and rejects any measure disrupting order and calm in that country."

The US is implacably hostile toward Iran, opposing conflict resolution while pretending otherwise.

There's virtually no prospect that Biden regime hardliners will change what's been hard-wired US policy against Iran for 42 years.

"The Kurdistan region is waiting for the central government in Iraq to declare its official decision to expel (hostile) US forces."

Like its predecessors, the Biden regime and Pentagon support permanent US occupation of Iraq.

According to the Middle East Eye (MEE), ISIS is "regrouping in northern Iraq."

Its fighters are conducting "attacks from (the group's) base in the Hamrin Basin, (a) rugged and impenetrable" area.

It's "one of the largest and most dangerous havens in which radical Sunni and Kurdish armed groups have concentrated for decades, and where IS fighters fall back to whenever security becomes too tight in other areas."

ISIS is a US creation. So are al-Qaeda, its al-Nusra offshoot, and likeminded terrorist groups – used by the Pentagon and CIA as proxy troops.

Obama once claiming that ISIS will "be defeated" and Trump earlier saying that "we're knocking the hell out of" the terror group were gross exaggerations.

Russia in Syria, the country's military, Iraqi troops, and Popular Mobilization Forces knocked the hell out of ISIS for real.

Along with other US-supported jihadist groups, numbers in their ranks fluctuate.

When greatly reduced, they can be significantly increased by the Pentagon and CIA at their discretion.

As needed in pursuit of their imperial agenda, their fighters are recruited, armed, trained, directed, and shifted to areas where wanted to be used as US proxies.

According to an unnamed Iraqi military commander:

"We recorded a remarkable increase in the organization's activities…during the last month, compared to the months preceding it."

ISIS fighters "carried out three big operations, and this is something that cannot be overlooked or ignored."

"They still pose a real threat, but their current attacks are aimed only at proving their existence, as the organization is no longer able to hold territory."

That can change significantly as happened earlier when the Pentagon and CIA mobilized large numbers of its fighters in Iraq and Syria.

They captured, held and established strongholds in both countries.

If pressure mounts for expulsion of Pentagon forces from Iraq and/or Syria, a US strategy similar to what happened earlier could repeat for them to stay -- based on the phony pretext of combating the scourge of ISIS that are Pentagon/CIA proxies.

The group may never again gain control of around one-third of Iraqi and Syrian territory as before.

Yet they and likeminded jihadists remain as threatening as their US handlers want them to be in pursuit of its regional aims.