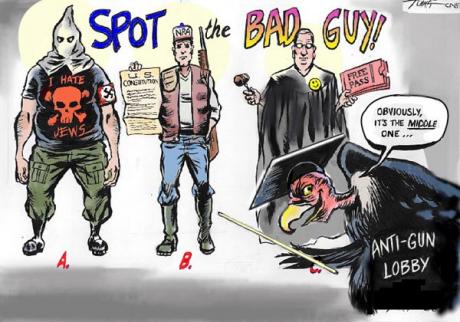 As a United States Congressman, I take my oath to uphold all of the Constitution and the Bill of Rights very seriously. Unfortunately, too many in Washington DC believe they can pick-and-choose which provisions of the constitution they can uphold. For example, many politicians, judges, and bureaucrats believe they have the power to disregard our right to own guns, even though the second amendment explicitly guarantees the people's right to "keep and bear arms."

Like the Founding Fathers, I believe that the right to keep and bear arms is fundamental to a free society.  Where law-abiding citizens are most freely allowed to defend themselves, communities are safer, while crime rises when law-abiding people's access to firearms is restricted. Gun laws only disarm those who respect the law.  Those with criminal tendencies do not turn in their weapons and reform their ways because government bureaucrats enact statutes that tell them to.  Gun control laws turn peaceful citizens into sitting ducks for criminals to prey upon.

Ironically, one of the most draconian gun laws in the nation is in the nation's capital. Banning guns did not make DC safer.  In fact crime in DC rose after the gun ban went into place!  Fortunately, last year, a federal court struck down DC's gun ban in the case of DC v. Heller.  This is the first time in years a court found a gun control law violated the second amendment. However, victory is not secured.  The city of DC has appealed and the Supreme Court has agreed to hear the case. If the lower court's decision is upheld, law abiding citizens should once again be allowed to defend themselves in DC and I would expect it to become a much safer city.  It would also set a very positive precedent that could affect gun laws all over the country.

However, a Supreme Court decision that the District of Columbia 's gun laws are a "reasonable" infringement on constitutional rights could severely setback the gun rights movement.


This is why I have signed on to a brief headed by Texas Senator Kay Bailey Hutchison and signed by a majority of Congress asking the Supreme Court to uphold the lower court's decision and take a stand for stricter standards of constitutional review for gun laws. I am pleased to work with Senator Hutchison, and so many of my other colleagues, on this important issue. As a member of the Second Amendment Caucus, I will continue to work with those of my colleagues who support gun rights and grassroots activists to defend the Second Amendment Rights of Americans.
SOURCE