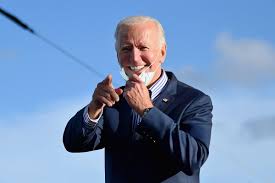 At a Pfizer facility for producing hazardous DNA altering technology for mass-jabbing unsuspecting victims against covid, he performed PR duties for the company and his regime's diabolical plot to mass-infect maximum numbers of people with toxins that don't protect and risk serious harm.

Punctuated with a litany of bald-faced Big Lies, Biden pretended that what's toxic and highly dangerous is beneficial.

"(O)nce we beat covid (sic), we're going to do everything we can to end cancer (sic)," he roared.

New strains of covid (aka flu) have shown up annually for time immemorial, what Biden or others won't "beat" — at least not any time soon.

As for beating cancer, nearly half a century after Nixon signed the 1971 National Cancer Act, vowing to find a cure in his State of the Union address, rates of the disease are at epidemic levels.

According to the late Samuel Epstein, an expert on the science and politics of the disease, it's because "(t)he cancer establishment is fixated on damage control – diagnosis, treatment and basic genetic research – and is indifferent, if not sometimes hostile, to cancer prevention – getting carcinogens out of the environment," adding:

Cancer and other major diseases are big business. The more victims, the greater the bottom line benefits.

The same holds for pushing mass-jabbing, pretending that seasonal flu is covid, that unless inoculated, you're vulnerable to serious harm.

The annual recovery rate for seasonal flu exceeds 99% with no need for mRNA technology or conventional vaccines.

Instead of setting the record straight, the public is lied to by government, Pharma and their media press agents.

Biden pushed the Big Lie in his Friday remarks.

Mass deception defines all his comments. He was selected, not elected, to betray the public trust, to continue US war on humanity at home and abroad.

His litany of lies and mass deception continued in his virtual Munich Security Conference remarks.

"America (isn't) back" as Biden claimed. It remains an unprecedented menace against ordinary people everywhere.

Is he "a man of his word" as claimed? Almost straightaway in office, he broke virtually every campaign promise made.

He's like all the rest in the West — never to be trusted, consistently pledging one thing, then going another way.

"The challenges we face today" were made in the USA.

Responsible for enormous harm on countless millions of people, it's not enough for Biden and hardliners directing his agenda.

They want more of the same, harming ordinary people everywhere so privileged ones can benefit at their expense.

"The United States is fully committed to our NATO alliance" to continue waging endless war on humanity.

Biden regime "support for the diplomatic process" is all about using it as a weapon of war by hot and/or other means on invented enemies like China, Russia and Iran.

Hardliners around him don't aim to "end war(s)." They want them escalated and new ones launched.

They're not "fight(ing) against ISIS." They're currently aiding its resurgence in Syria, Iraq and elsewhere.

Biden's address was strewn with Big Lies, mass deception and meaningless cliches like:

"Reclaiming our place in international institutions."

"Lifting up our values at home."

"Speaking out to defend them around the world."

"Revitalizing America's network of alliances and partnerships that have made the world safer for all people."

And lots more rubbish like the above, painful listening, showing that dirty business as usual continues on Biden's watch.

It includes a permanent state of war on invented enemies. They include ordinary people at home and abroad.

Russia shows signs of no longer tolerating hostile remarks like:

"The Kremlin attacks our democracies (sic) and weaponizes corruption (sic) to try to undermine our system of governance (sic)."

"Putin seeks to weaken the European project and our NATO Alliance (sic)."

"He wants to undermine the transatlantic unity and our resolve, because it's so much easier for the Kremlin to bully and threaten individual states than it is to negotiate with a strong and closely united transatlantic community (sic)."

Reality is worlds apart from his war of words on Russia, much more of the same surely coming.

Leaving Iran unaddressed in his Friday remarks, he and hardliners around him — in cahoots with Israel — perpetuate the myth of its ruling authorities seeking nukes, supporting terrorists, and destabilizing the region.

All of the above applies to the US and its imperial partners.

Iran, Russia, and other nations free from US control operate by higher standards — pursuing peace, not war, cooperating with other nations over endless confrontation, and observing the rule of law.

US, NATO, and Israeli policies long ago abandoned the above standards in pursuit of their diabolical aims.