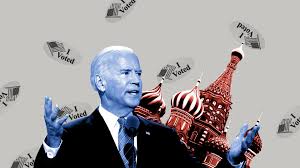 Forever war on humanity at home and abroad is longstanding US policy — undemocratic Dems the lead offender.

Ordinary Americans are exploited, not served.

Governance is of, by, and for privileged interests exclusively.

Democracy as it should be is abhorred and tolerated nowhere.

Police state rule is the law of the land US policymakers want instituted everywhere.

Views challenging the official falsified narrative are censored — perhaps criminalizing them to come next.

In her 1951 book, "The Origins of Totalitarianism," Hannah Arendt explained what applies to how America and the West are ruled today.

Ordinary people are "dominated and terroriz(ed)" into subservience to ruling class interests.

Wealth and power are concentrated in elitist hands.

"(N)either perverted or sadistic," they consider themselves superior and entitled to dominate others — at home and abroad.

There's virtually no chance that Washington's ruling class will change its wicked ways — no prospect for normalized relations with nations free from its control, notably not with China, Russia and Iran.

US war by other means rages against these nations and others unwilling to sacrifice their sovereign rights to imperial USA.

"We have already sent requests to (the White House) to organize first contacts and start just sorting out what we can do together."

At the same time, Antonov admitted that US "pressure on us will continue, tough pressure, especially in the human rights area, probably in the area of ??freedom of religion."

"(W)e will again be accused of" all sorts of invented things.

Separately, Russia's Foreign Ministry said it's ready to review bilateral relations with Washington in hopes of "establishing rapport" and improving them.

On Wednesday, WaPo reported that the Biden regime "is preparing sanctions and other measures to punish Moscow for…malign cyberactivity (sic) and the near-fatal poisoning of" Navalny (sic)."

No evidence suggests hostile Russian "cyberactivity" against any nation(s). No poisoning of Navalny occurred.

The same goes for other nations on its target list for regime change.

"But the aim of the various measures…is to convey a broader message that the Kremlin for years has used cyber tools to carry out an array of actions hostile to the interests of the United States and its allies (sic): interfering in elections (sic), targeting coronavirus vaccine research (sic), and creating a permissive atmosphere for criminal hackers who, among other things, have run ransomware botnets that have disrupted American public health facilities (sic)."

All of the above is rubbish, not a shred of truth about it, no evidence corroborating invented accusations because none exists.

There's no ambiguity about hostile US relations toward sovereign independent nations like Russia.

There's no chance for these nations to improve relations with hegemon USA. It's a waste of time trying.

Things most likely will deteriorate more than already, risking unthinkable confrontation with nations able to hit back hard in response to US aggression if launched.

"(T)he United States play(s) the role of lead singer and conductor of the choir" of Western actions against Russia.

"This is a coordinated information campaign. Its goal is a global attempt to contain Russia and interfere in its internal affairs."

"This is nothing new…Russia is far from being the only country targeted by" the US-dominated West.

Commenting on Biden regime police state persecutions following  the January 6 anti-Trump false flag on Capitol Hill — staged by US dark forces to blame DJT and his supporters for what they had nothing to do with, Zakharova added:

The FBI "opened more than 400 criminal cases and applied for more than 500 search warrants and subpoenas for suspects."

"It has also brought charges against and detained around 200 people."

Innocent people are being criminalized, "losing their jobs… being banned from social media and publicly ostracized."

What's going on is reminiscent of post-9/11 persecutions and prosecutions of law-abiding Muslims in America for praying to the wrong god.

Last Sunday, Biden's national security advisor Sullivan said the regime will soon come down hard on Russia with "a mix of tools seen and unseen," adding:

"(I)t will not simply be sanctions because…a response to a set of activities like this (sic) require a more comprehensive set of tools, and that is what the (Biden regime) intends to do."

"We will ensure that Russia understands where the US draws the line (sic)."

The above remarks are a virtual declaration of escalated US war on Russia by other means.

Sergey Lavrov explained that Biden and hardliners around him intend more confrontational policies toward Moscow than their predecessors.

Bilateral relations are going from bad to worse.

Vladimir Putin, Sergey Lavrov and other Russian officials know the futility of trying to engage with their US counterparts diplomatically.

Looking ahead, confrontational ones will define US policies toward Russia and other independent nations with no prospect of turning a page in a positive direction.

The US is a totalitarian police state on a fast track toward full-blown tyranny — gangsterism on steroids with nukes.