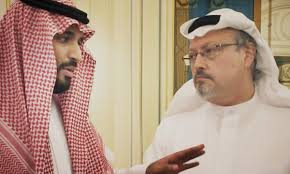 An unclassified Director of National Intelligence (DNI) report to be released Thursday is expected to blame Saudi crown prince Mohammed bin Salman (MBS) for the brutal murder and dismemberment of Jamal Khashoggi inside the kingdom's Istanbul, Turkey consulate in October 2018.

There's no ambiguity about what happened and who bears responsibility.

In Riyadh, nothing of importance happens with his authorization or direct order. No underlings would dare act on their own.

He's de facto Saudi ruler — in charge of virtually all affairs of state, including decisions on life and death.

So-called Saudi courts do his bidding. So do all others in the kingdom except for his father king Salman.

In poor health, he effectively abdicated authority to his favorite son.

There's no ambiguity about his ruthlessness.

His responsibility for killing Khashoggi created an international uproar for weeks.

The CIA and NSA likely have the same or similar recordings by bugging Turkish facilities, including its Istanbul consulate.

On Wednesday, Biden reportedly spoke to king Salman ahead of the DNI's report on what happened to Khashoggi and who bears responsibility.

It's expected to confirm the CIA's earlier assessment — that MBS ordered his murder, dismemberment, and elimination of his remains.

A December 2018 US Senate resolution blamed him for what happened — based on CIA supplied information.

At the time, Senator Lindsey Graham said "(y)ou have to be willfully blind not to" know that MBS ordered Khashoggi's murder — denouncing the crown prince as an unreliable US partner.

Will he continue dirty business as usual with the kingdom or tell king Salman that normalized relations depend on replacing the crown prince as de facto Saudi ruler?

Most likely he'll avoid meddling in the kingdom's internal affairs other than perhaps indirectly suggesting that Salman handle kingdom dirty linen on his own.

MBS is feared and despised by many royal family members.

According to former DNI James Clapper, what happens after the current DNI's report is released depends on what royal family members were involved in Khashoggi's assassination besides MBS.

"Some are more influential than others," he said, adding:

"If the intent (of the report's release)  is some form of regime change, that is a very heavy policy call, and (US) policymakers should deliberate this very carefully and thoughtfully to include contingency off-ramps if things go wrong."

The problem with urging Salman to replace MBS is that he's the king's favorite son.

He's well-protected by heavy security and an intelligence apparatus to safeguard against possible threats.

So it's unclear how US/Saudi relations will be affected after the DNI report is released and reactions to its revelations domestically and in Riyadh.

Perhaps nothing much will change.

Bilateral relations are at least largely unchanged over two years after Khashoggi's assassination.

Despite candidate Biden saying "Khashoggi was murdered and dismembered...at the orders of the crown prince," and adding:

"We are going to make them pay the price and make them the pariahs that they are," Tony Blinken days earlier called the Saudis an important US regional partner.

So it's doubtful that Biden will materially alter a relationship with Riyadh that Franklin Roosevelt established with king Saud aboard the USS Quincy near the end of WW II.

Even though the US no longer is dependent on Saudi oil, the State Department's characterization of it at the time as a "stupendous source of strategic power, and one of the greatest material prizes in world history" is still relevant.

It is Snowing in the Desert in Saudi Arabia