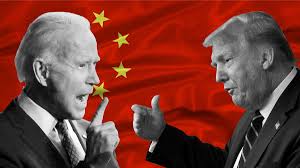 On Wednesday, Blinken spokesman Price said Biden's focus on China "has competition at the center," adding:

The relationship is "adversarial" while at times it'll be "cooperati(ve)" when serves US interests.

This type relationship is confrontational and exploitive, clearly not what China wishes, deserving what partisan US hardliners won't deliver.

Price added that Biden's choice for US envoy to China and other members of his geopolitical team will be charged with confronting its leadership over establishing cooperative relations.

At his Senate Intelligence Committee confirmation hearing on Wednesday, longtime US diplomat nominated by Biden to be his CIA spy chief William Burns showed that he'll follow the above playbook, saying:

Like other hardline US officials, he got things backwards.

Washington's geopolitical agenda threatens China and other nations free from its control.

Burns added that if confirmed as Langley spy chief, "four crucial and inter-related priorities will shape (his) approach: China, technology, people, and partnerships."

What he means is that he'll be confrontational toward all nations unwilling to bend to Washington's will.

Former consultant to Langley during the Cold War Chalmers Johnson called the agency the president's private army — for ill, not good.

Operating extrajudicially, it's unaccountable to Congress and the public.

When Johnson was what he called "a spear carrier for the empire," the CIA had five missions.

Four dealt with collection, coordination and dissemination of intelligence.

The fifth one was vague, allowing the agency to "perform such other functions and duties related to intelligence affecting the national security as the National Security Council (overseeing it) may…direct."

As an unaccountable army to the president and deep state, it's involved in toppling democratic governments, assassinating foreign leaders and other officials it wants eliminated, propping up friendly despots, snatching targeted individuals for abduction and transfer to US gulag imprisonment, and other dirty tricks on the world stage.

Today with advanced technology, weapons, and a virtual unlimited black budget, the agency is an unparalleled global menace along with the Pentagon.

As agency director, Burns' top priority will be challenging China with an army of specialists charged with pursuing virtually every imaginable dirty trick.

Similar policies will be pursued against all invented US enemies.

Biden's geopolitical team is charged with this mission, assuring uneasy relations with Beijing.

Burns is the first US career foreign service official to run the spy agency.

According to international relations expert Lu Xiang, Langley always coordinates its agenda toward China and other nations with US diplomats.

It's been spying on China and other nations since established in 1947.

But the "substance" of Washington's confrontational agenda remains much the same.

"China's rising tech strength and greater role in the world economy has made the US uneasy," he said.

It "considers China an 'imaginary enemy' that would erode its global leadership and political influence."

China's exponential development and growth heads the country toward becoming the world's political, economic, industrial, and perhaps technological leader in the coming years and decades.

The notion doesn't go down well in Washington though there's little that US hardliners can do about it.

During economic decline in the US and West last year, China was the only major nation to experience economic growth.

Compared to about 11% of the US economy at the end of the 20th century, China's GDP today is around 70% of America's, a remarkable achievement in a short time.

According to former World Bank chief economist Justin Lin Yifu, China will surpass the US to become the world's leading economy by 2028, two years earlier than forecast.

Its high-end manufacturing development is unprecedented.

It's the global leader in 5G, high-speed rail technology, while making breakthroughs in aerospace, new energy forms, and areas related to national defense and weaponry.

At the same time, it lags the US in chips, software, and other key areas.

Perhaps in around another decade, it'll surpass the US and West technologically in all respects.

Its five-year plan through 2025 prioritizes technological self-sufficiency as a major pillar of continued economic growth.

It wants to compete with the US and other countries on an even playing field, seeking cooperative relations, not the other way around prioritized by both right wings of the US war party.