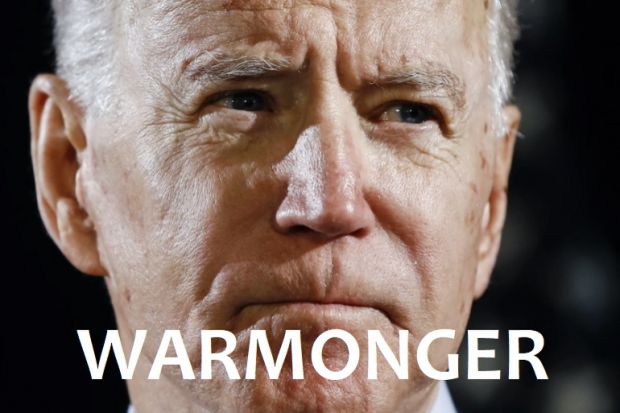 On all things war related, Trump mainly focused on waging it all-out by other means on Iran, China, and other nations free from US control.

Early in his tenure, the rape and destruction of Raqqa, Syria and Mosul, Iraq were major exceptions.

For the most part, he was relatively quiet on the hot war front, notably launching no new ones during his time in office.

Biden and warmongers surrounding him are cut from a different cloth.

As US senator and vice president, Biden supported one preemptive US war after another on invented enemies — nonbelligerent states threatening no one.

Will the pattern repeat with him in the White House?

Is it just a matter of time before hardliners running his geopolitical agenda invent pretexts to escalate ongoing US wars and/or launch one or more new ones?

If past is prologue, greater US warmaking is highly likely.

In the Middle East, plans to escalate war in Syria may exist or are being prepared.

The same goes for neighboring Iraq. Its parliamentarians and ordinary people want their country back, US occupation ended once and for all.

Not if undemocratic Dems have their way. US forces came to Iraq to stay.

As in Syria, Afghanistan and elsewhere, permanent US occupation is planned — enforced through the barrel of a gun.

According to US war secretary Lloyd Austin on Sunday:

"We'll strike, if that's what we think we need to do, at a time and place of our own choosing. We demand the right to protect our troops (sic)."

In late February, hardliners in charge of Biden's geopolitical agenda OK'd aggression against targets along the Iraqi/Syria border.

Is more of the same planned against both countries?

Is direct US confrontation with Iran coming ahead?

Are conflicts planned in Central Asia, North Africa and/or the Indo/Pacific?

According to Tom Dispatch in late January:

"Biden inherit(ed) (US) global war—and burgeoning new Cold War —spanning four continents and a military mired in active operations in dozens of countries, combat in some 14 of them, and bombing in at least seven."

"That sort of scope has been standard fare for American presidents for almost two decades."

Will he escalate US wars of terror, not on it?

As senator and vice president, Biden cheerled US preemptive wars.

TD: "Whether the issues are war, race, crime, or economics, Uncle Joe has made a career of bending with the prevailing political winds and it's unlikely this old dog can truly learn any new tricks."

He "filled his foreign policy squad with Obama-Clinton retreads, a number of whom were architects of—if not the initial Iraq and Afghan debacles."

They followed with "disasters in Libya, Syria, West Africa, Yemen, and the Afghan surge of 2009."

Since the run-up to WW I, Dems have been more belligerent than Republicans — Bush I, II, and Dick Cheney major exceptions.

So was Jack Kennedy going the other way, transforming himself from a warrior to peacemaker, one among other reasons why he was assassinated.

Jimmy Carter earlier said: During his time in office, "(w)e never dropped a bomb. We never fired a bullet."

Dem presidents after his tenure were warriors, not peacemakers — notably Biden as senator, vice president, and now figurehead president, a disturbing record since the early 1970s.

Is escalated warmaking on his watch coming? His history of supporting wars on invented enemies and interventionist geopolitical team suggest more of the same ahead.

Terror-bombing targets along the Iraqi/Syrian border in late February perhaps was prelude for follow-up aggression.

Since taking office, increased numbers of Pentagon forces, heavy weapons, munitions and equipment were sent to Kurdish-controlled eastern Syria where most of the country's oil is located.

Recent US belligerence "strengthens and expands the activities of the terrorist Daesh (ISIS) in the region," adding:

"The (late Feb.) attack on anti-terrorist resistance forces is the beginning of a new round of (US) organized terrorism."

He vowed firm resistance to "confront the US plan to revive terrorism in the region."

US aggression time and again signals more of the same coming — unjustifiably justified by invented pretexts. No legitimate ones exist.

It's a location from which US airstrikes can hit targets in the Middle East and Indo/Pacific.

According to military.com, the US is "add(ing) roughly 10,000 personnel to…the Middle East."

Southfront reported that Syrian forces are "prepar(ing) a decisive push on the Turkish-occupied areas" in the country's north, adding:

"This proposed military council is clearly meant to provide a legitimate cover for the rebranded terrorist activities of HTS and other al-Qaeda factions in Greater Idlib."

According to Deputy Head of the Russian Coordination Center in Syria, Adm. Alexander Karpov:

"There has been information on that Jabhat al-Nusra terrorists are getting ready to stage a new provocation in the de-escalation zone in Idleb which includes staging a false flag chemical attack."

Russia's Defense Ministry reported that labs in Idlib run by European trained experts are preparing CWs for use by jihadists to stage false flag attacks to be blamed on Damascus.

If one or more incidents occur, Syria will surely be wrongfully blamed for what it had nothing to do with — like many times before.

Will Biden hardliners use false flag CW incident(s) as a pretext for escalated aggression?

Kiev "is deploying additional units of heavy weapons and military equipment to the contact line…confirmed by OSCE reports."

All of the above are worrisome signs of what Biden hardliners may be planning — escalated aggression by US forces, their jihadist proxies and US installed regime in Kiev.