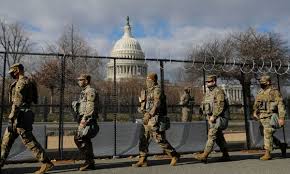 US Capital to Be Permanently Militarized?

A Dem Capitol Hill security report on the January 6 anti-Trump false flag for Biden/Harris to replace DJT ignored the diabolical plot — a US Reichstag fire.

Will Washington be permanently militarized in the wake of what happened?

Will something similar be ordered for New York, Chicago, Los Angeles and other major US cities — on the dubious pretext of protecting national security?

Mandates in place since seasonal flu was renamed covid were unthinkable pre-2020 but happened largely with public compliance?

If ordered, will Americans accept militarized US cities that infringe on public assembly, free movement, and other constitutional rights?

Mass acceptance of social control last year showed that when manipulated by invented threats, most people will go along with what harms their health, well-being and fundamental rights.

The Dem task force 1-6 recommended initiation of a permanent militarized police battalion staffed with rotating National Guard and Pentagon reserve forces — on the dubious pretext of protecting against violent outbreaks, the report saying:

"Our national capital is a prominent tourist destination, venue for many peaceful First Amendment activities, and a high-value target for foreign terrorists or domestic extremists (sic)."

"Yet it has no dedicated quick reaction force for response to crises."

They got access to Capitol Hill after police and federal law enforcers opened barricades surrounding it, permitting their entry into the main building.

Inside, guards led them to designated areas. What happened was orchestrated by anti-Trump dark forces well in advance.

Instead of preventing what happened, Capitol Hill security facilitated it in what appears to have been the climax to a homeland color revolution to end Trump's election challenge.

Establishing a new intelligence unit on the pretext of improving civil defense.

Enhanced screening to include "background checks for identification card holders."

Empowering the city's police chief to request greater militarization of the capital to deal with perceived (or invented) emergencies.

"The collective planning effort would be key to developing a shared understanding for any response effort and better enable unity of effort."

"This plan should be exercised quarterly through table-top exercises and reinforced in daily operations."

Congress will likely pass legislation to incorporate task force recommendations, Biden to sign it into law.

Perhaps more repressive legislation will follow, similar to the aftermath of the 9/11 mother of all false flags to that time — police state America to be hardened more than already.