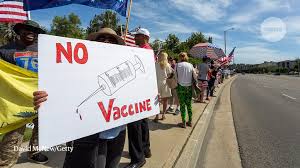 Growing numbers of scientists and medical experts in the US and Europe are expressing concerns about the most widespread ever uncontrolled human health experiment already turning out badly.

In Europe, a dozen prominent scientists and doctors addressed their concerns by open letter to the European Medicines Agency.

They called for the EMA to answer "urgent" questions about Pfizer/Moderna's experimental mRNA technology and AstraZeneca's vaccine for covid mass-jabbing.

These rushed to market/unapproved drugs were OK'd for emergency use only when no real emergency exists, an invented one alone.

If essential to public health safety issues aren't properly addressed, the group of 12 called on the EMA to halt mass-jabbing.

They're greatly concerned about inadequate testing for drugs now in widespread use, an unacceptable gamble with health that's unscientific and problematic.

The casualty count from mass-jabbing is increasing exponentially.

Nine European countries halted use of AstraZeneca's covid vaccine because of blood clots and numerous other adverse events.

Moderna's chief scientist Dr. Tal Zaks earlier admitted that the firm's mRNA technology in use for covid mass-jabbing is "hacking the software of life."

The toll is likely multiples greater, including many deaths.

The US and continental Europe are adversely affected the same way.

Yet the rush to mass-jab with what no one should touch is mass promoted by governments and their press agent media.

The unacceptably high toll after a few months suggests catastrophically higher numbers ahead if what's going on continues unchecked.

"We note that a wide range of side effects is being reported following vaccination of previously healthy younger individuals with the gene-based (covid) vaccines."

"(T)here have been numerous media reports from around the world of care homes being struck by (covid) within days of vaccination of residents."

"While we recognize that these occurrences might, every one of them, have been unfortunate coincidences, we are concerned that there has been and there continues to be inadequate scrutiny of the possible causes of illness or death under these circumstances, and especially so in the absence of post-mortem examinations."

"(W)e question whether cardinal issues regarding the safety of the vaccines were adequately addressed prior to their approval by the European Medicines Agency (EMA)."

"As a matter of great urgency, we herewith request that the EMA provide us with responses to the following issues:"

1. "1. Following intramuscular injection, it must be expected that the gene-based vaccines will reach the bloodstream and disseminate throughout the body."

"We request evidence that this possibility was excluded in pre-clinical animal models with all three vaccines prior to their approval for use in humans by the EMA."

2. "If such evidence is not available, it must be expected that the vaccines will remain entrapped in the circulation and be taken up by endothelial cells."

"There is reason to assume that this will happen particularly at sites of slow blood flow, i.e. in small vessels and capillaries."

3. If such evidence is not available, it must be expected that during expression of the vaccines' nucleic acids, peptides derived from the spike protein will be presented via the MHC I — pathway at the luminal surface of the cells. Many healthy individuals have CD8-lymphocytes that recognize such peptides, which may be due to prior (covid) infection, but also to cross-reactions with other types of coronavirus."

"We must assume that these lymphocytes will mount an attack on the respective cells."

4. "If such evidence is not available, it must be expected that endothelial damage with subsequent triggering of blood coagulation via platelet activation will ensue at countless sites throughout the body"

5. If such evidence is not available, it must be expected that this will lead to a drop in platelet counts, appearance of D-dimers in the blood, and to myriad ischaemic lesions throughout the body including in the brain, spinal cord and heart."

"Bleeding disorders might occur in the wake of this novel type of DIC-syndrome including, amongst other possibilities, profuse bleedings and haemorrhagic stroke."

"We request evidence that all these possibilities were excluded in pre-clinical animal models with all three vaccines prior to their approval for use in humans by the EMA."

The letter addressed other urgent concerns that require answers.

If evidence requested is not available, the group of 12 "demand(s) that approval for use of the gene-based vaccines be withdrawn until all the above issues have been properly addressed by the exercise of due diligence by the EMA."

Issues raised are serious concerns that affect the health and lives of tens of millions in Europe and elsewhere.

If they continue to be unaddressed, permitting use of experimental drugs for mass-jabbed "was premature and reckless…human experimentation" on an unprecedented scale.

The group of 12 demanded answers to their questions in seven days, saying otherwise they'll make their letter public.

Release of the letter indicates no answers were received.

It's clear from what's going on that authorities in Europe are indifferent toward the health, welfare and fundamental rights of their citizens.

They been lied to and otherwise deceived — permitting their exposure to hazardous drugs that may irreparably harm countless tens of millions in the US, Europe and elsewhere.

Scientists and doctors who prepared, signed and sent the letter include the following experts:

Getting vaccinated for COVID-19 means that a person will become a GMO zombie,--