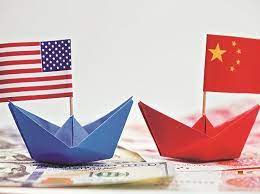 China Slams US Meddling in its Internal Affairs

On all things China, Biden regime hardliners continue US war on the country by other means.

Signed into law last July by Trump, not a single congressional profile in courage opposed what breached the UN Charter and US Constitution.

The measure illegally meddles in China's internal affairs on all things related to Hong Kong, its sovereign territory.

It imposes "sanctions on entities that violate China's obligations to Hong Kong (sic)," as well as "secondary sanctions on banks that do business" with sanctioned entities.

Unacceptable US toughness on China further widens the breach between both countries.

The Biden regime's hostile actions came on the eve of Sino/US talks in Anchorage, Alaska Thursday.

It soured them before begun, assuring counter-measures from Beijing in retaliation. Hardball cuts both ways.

Once again, unlawful US "sanctions exposed (its) evil intention to meddle in China's internal affairs and disrupt Hong Kong."

Washington has no power or influence over China's internal affairs.

Yet it continues brandishing a big stick, pretending strength in dealings with China it lacks.

On all issues related to Hong Kong, Taiwan, the South China Sea, and its other internal affairs, hostile US actions against Beijing achieve nothing.

Calling Japan's actions "contemptible" for operating as a US "strategic vassal," Zhao added:

Their unacceptable statement is "a vicious attack on China's foreign policy (and) gross interference in China's internal affairs."

Washington and Tokyo "cling to a Cold War mentality, intentionally create confrontation between camps, and attempt to create an anti-China encirclement."

"These efforts run counter to the current of the times. (They'll) only bring chaos and even confrontation to the region."

"In order to fulfil its selfish interest in containing China's rise and rejuvenation, Japan has allowed itself to be dependent on the whims of others, to become a strategic vassal of the United States, it has broken the promises it made and trust it gained and harmed Sino-Japanese relations."

The hostile US statement Japan tagged along with falsely accused China of "behavior, where inconsistent with the existing international order (sic), presents political, economic, military, and technological challenges to the alliance and to the international community (sic), adding:

Defying reality, it accused China of "coercion and destabilizing behavior toward others in the region (sic)."

The statement included other false accusations. They reflect how the US and its imperial partners operate worldwide, polar opposite Beijing's cooperative relations with other countries.

Events preceding Sino/US talks in Alaska set the stage for tough talk by both sides, with no chance for improving bilateral relations, just the opposite.

Biden's geopolitical team is no different from Trump's — wrecking balls on the world stage.

Along with achieving nothing, over time they alienate allies and further widen the breach between the US and invented adversaries.

As for China, most regional and world community nations overall value positive bilateral relations with Beijing, especially what relates to trade and other economic issues.

So far, the Biden regime is pursuing the same failed agenda toward China followed by Trump — showing no signs of wanting to improve bilateral relations.

It's frosty bordering on confrontational if the US pushes things too far.