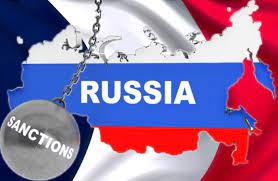 More sanctions were imposed on the phony pretext of poisoning Navalny.

Ignored were heroic efforts by Russian doctors to save him after falling ill last summer from what was diagnosed as a metabolic disorder en route to Moscow.

No poisoning occurred. Yet the long ago debunked Big Lie refuses to die.

When Washington imposes sanctions on invented adversaries and enemies, phony pretexts are easy to concoct.

If Russia wanted Navalny eliminated — a political nobody with scant public support — he'd have been done away with long ago.

At most, Navalny is a minor irritant too insignificant to matter.

He's now imprisoned through late 2023 for lawbreaking related to embezzling millions of dollars for personal use.

The department "is committed to preventing Russia from accessing sensitive US technologies that might be diverted to its malign chemical weapons activities (sic)."

Left unexplained is that so-called "sensitive US technologies" were at least largely blocked for export to Russia long ago, especially anything related to weaponry.

For many items related to national security and other applications, it's superior to what's available in the West.

When repeated ad nauseam, Big Lies take on a life of their own — no matter how convincingly debunked.

According to the Biden regime's commerce department, inventing its own false reality:

"By deploying illegal nerve agents against dissidents (sic), both inside and outside its borders (sic), the Russian government has acted in flagrant violation of its commitments under the Chemical Weapons Convention and has directly put its own citizens and those of other countries at mortal risk (sic)."

The above applies to US war on humanity at home and abroad — worlds apart from how Moscow operates.

"Our relationship will look different" from Trump's.

"We will be direct (sic). We will speak out on areas where we have concerns (sic), and certainly the Russians will be held accountable for the actions that they have taken (sic)."

In response to the latest Biden regime sanctions, Russia's Foreign Ministry said they widened the breach between both sides, making normalization of bilateral relations impossible as things now stand.

In response to escalated US war on Russia by other means, Putin, in part, turned the other cheek instead of sharply slamming what's unacceptable and hostile, saying:

"As for the statement by my American counterpart, we really are, as he said, personally acquainted."

"What would I answer him? I would tell him: Stay healthy. I wish him good health," adding:

"The US and the US leadership…seek to have certain relations with us, but only in areas that are of their own interest and only on their conditions."

"Although they think we are the same, we are different people."

"We have different genetic, cultural, and moral codes."

"They will have to live with that despite all the attempts to hinder our development."

"Regardless of sanctions and insults, they will have to live with that."

"We will proceed on that basis."

Over the next few days, Russian officials will decide how they'll deal with Biden regime hardliners ahead.

The only language they understand is toughness, what I've stressed many times before.

Showing weakness when strength is needed assures betrayal whenever hollow US promises are made.

Russia and other nations ill-treated by Washington should respond by giving its ruling authorities a taste of their own medicine — short of waging war.

When the US perceives weakness in an adversary, it takes full advantage.

Russia is too soft in its dealings with Washington.

It assures worsening bilateral relations, not the other way around.

It's notably been this way since Obama/Biden replaced democratic rule in Ukraine with Nazi infested fascist tyranny.

Since Biden replaced Trump in January, they nearly reached a breaking point.

Perhaps it's coming in the weeks or months ahead.

"Biden has insulted the citizens of our country with his statement."

"This is a tantrum that comes from powerlessness."

"Putin is our president. Attacking him is an attack on our country."

Trump while in office "maintained rhetoric appropriate to the level of head of state."

Biden's statement…is beyond common sense. This is no way for the leader of" any nation to behave toward a foreign counterpart.

Based on what's happened with more unlawful US sanctions on Russia coming ahead, bilateral relations most likely will deteriorate further.

Chances for improving them appear nil.