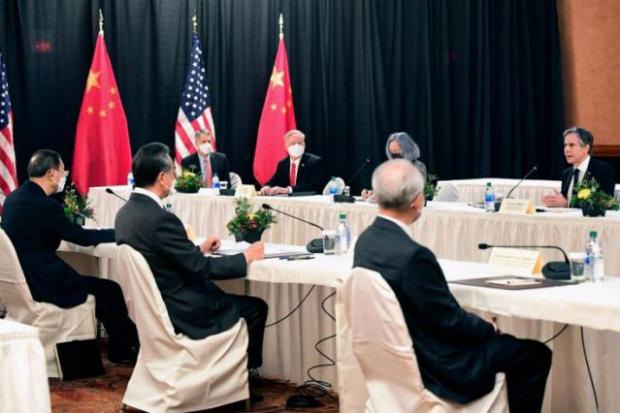 Longstanding US geopolitical aims are all about seeking dominion over planet earth, its resources and populations — wanting other nations worldwide subservient to its will.

Nations free from its control are targeted for regime change, forever wars by hot and/or other means its favored tactics.

Diplomatic outreach by independent countries to the US for improved relations are exercises in futility.

Promises made by its policymakers are hollow, betrayal following time and again.

In response to Biden calling Vladimir Putin soulless, a killer, Russia's leader proposed a "discussion" with his counterpart on live television.

"Without any delays and directly in an open, direct discussion," he added.

"I don't want to put this off for long."

"(W)e could do it tomorrow or Monday. We are ready at any time convenient for the American side."

Asked on Thursday if he'll agree to discuss bilateral issues live on television with Putin, Biden ducked the question.

With bilateral relations more dismal than at any time in modern memory and sinking to new depths, the likelihood of dominant US Russophobes turning a page for improved relations with Moscow is virtually nil.

Washington considers Russia a mortal enemy — for its sovereign independence, not for any threats to US security.

None exist from Russia, China, Iran or other countries.

When claimed otherwise, they're invented, a pretext for unbridled militarism and belligerence.

The US considers China its top national security threat — for its growing prominence on the world stage, its economic strength, heading toward surpassing America's, perhaps in a decade or less.

Beijing prioritizes cooperative relations with other countries, polar opposite how the US operates.

"Beijing intends to dominate the US and the rest of the planet economically, militarily and technologically (sic)."

The above sentiment is bipartisan in the US, both right wings of its war party militantly hostile toward China and other nations free from their control.

Sino/US talks in Anchorage, Alaska continue for a second day on Friday.

"The US side proposed to have this dialogue with China, and China accepted this proposal, a constructive gesture showing our sincerity towards resuming China-US dialogue and exchange and improving and developing China-US relations."

"The Chinese side will make clear its positions and concerns on relevant issues during this dialogue."

"All topics that can be discussed are on the table."

"On issues that bear on China's sovereignty, security and core interests, no one shall expect China to make any compromise or trade-offs."

"China is determined and resolute in safeguarding its core interests."

"It is a fool's errand that serves no purpose at all to try to set the tempo for the dialogue through 'megaphone diplomacy,' or to gang up on China."

While engaging in good faith diplomatic outreach with the US, an effort to improve bilateral relations, Beijing knows how time and again its best intentions for cooperative relations with Washington aren't good enough.

Ahead of talks, Tony Blinken repeated false claims about detention of millions of Uyghurs in Xinjiang by China, along with expressing "deep concerns with actions by China (on) Hong Kong (and) Taiwan (sic)."

He slammed nonexistent Chinese cyberattacks on the US (sic) and "economic coercion toward our allies (sic)" — invented issues he raised in bilateral talks.

It made for frosty discussions in Anchorage on Thursday, perhaps more of the same Friday.

In response on Thursday, China's Central Committee official/Foreign Affairs Director Yang Jiechi reportedly accused the US of brandishing a big stick and exerting financial supremacy to pressure other nations into compliance with its will, adding:

"The US has no competence whatsoever to take a patronizing tone with China. It won't work on us."

Supported by international law, China strongly objects to US interference in its internal affairs.

Calling for "no confrontation, no conflict, mutual respect and win-win cooperation with the United States," Yang and other Chinese officials know that dominant US hardliners have other aims in mind in dealings with the world community of nations.

Separately on Thursday, an unnamed member of China's delegation in Anchorage said the following:

"The Chinese mission has arrived at the (US) invitation in Anchorage with sincere intentions to hold strategic dialogue with the United States and was preparing (for talks) in line with the protocol earlier agreed on by both parties," adding:

"However, the US party has significantly gone beyond the time limit during the opening speech resorting to baseless attacks and accusations concerning the Chinese foreign and internal policy, thus provoking a conflict."

"This is not in line with the ethics of the treatment of the guests and violates the diplomatic protocol."

"The Chinese party has made a harsh response."

Before talks began, Beijing's envoy to Washington Cui Tiankai said the Chinese side does not have high expectations "or fantasies" about improving bilateral relations from two days of talks, adding:

On all things related to China's core interests, including its sovereign rights and territorial integrity, they'll be no compromises with the US.

"Such practice of hegemony and interventionism seriously violated international law and the norms governing international relations, and interfered in China's domestic affairs."

"It fully revealed the vicious intention of the US to disrupt Hong Kong and hinder China's stability and development."

"No interference or slander can shake China's resolution to safeguard its national sovereignty, security, (and) development interests…"

"The US had better quit political threatening as soon as possible."

Bilateral relations are frosty. They're more likely to worsen ahead than improve.