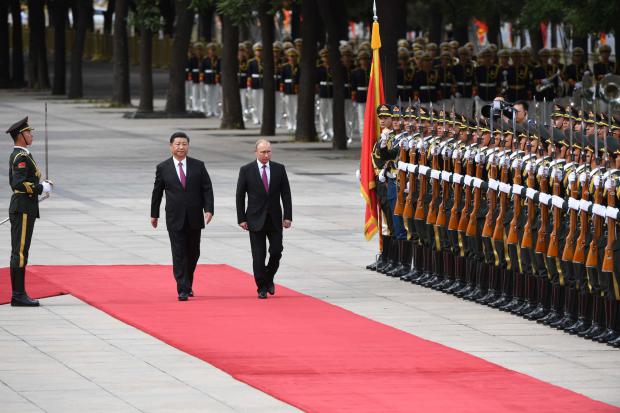 NYT War on China and Russia

Like other establishment media propagandists — their reports based on state-approved talking points supplied them — Sanger supports the worst of US crimes of war and against humanity worldwide, providing press agent services for the imperial state.

Saying US relations with China and Russia "have echoes of the bad old days," Sanger defied reality with the following claims.

"(T)here is little of the nuclear menace of that era (sic)."

The above is in sharp contrast to what I said a number of times.

Today is the most perilous time in world history.

It's been this way since the 9/11 mother of all false flags, worsening greatly because diabolical policies instituted last year after seasonal flu was remained covid — the mother of all state-sponsored scams.

A decade ago, I stressed that daily events at home and abroad should scare everyone.

US forever wars rage by hot and/or other means on invented enemies.

No real ones exist so they have to be invented to try justifying what unjustifiable.

Conquest, occupation, colonization, and exploitation of ordinary people at home and abroad are prioritized.

So do policies favoring bankers, other corporate favorites, and super-rich elites.

Today's upside down reality endangers everyone.

Criminality in high places is rewarded, not punished.

Warmakers win peace prize — encouraging them to keep at more of the same.

Why not when war is considered peace by Western policymakers and press agent media.

Leaders who wage them reap huge rewards. Peacemakers are shunned and vilified.

So are social democrats. An anathema notion in the West, its ruling authorities tolerate it nowhere, not at home or abroad.

The worst of times keep getting worse.

US hegemonic rage to control planet earth, its resources and populations represents an unparalleled threat to everyone everywhere.

Trump's America first focus lowered the risk of greater global wars beyond ones he inherited.

With undemocratic Dems in charge under figurehead selected, not elected, Biden, the risk more hot wars is greatly heightened, including possible confrontation with Russia, China, and/or Iran.

What's unthinkable could happen by accident or design because Dems prioritize warmaking.

Instead of highlighting the risk, media propagandists like Sanger suppress it — while fronting for US deep state dark forces war on humanity.

Claiming "superpower rivalries today bear little resemblance to the past" by Sanger ignores the heightened threat of dominant Dems pushing things too far against nations able hit back hard against aggressors.

The risk of nuclear war was minimal during Cold War years.

It's far greater now because of US rage for unchallenged global dominance by whatever it takes to achieve its diabolical aims.

China, Russia, Iran, and other nations free from US control threaten no one. Claims otherwise are fabricated to manipulate people to believe what's not so.

In pursuit of its hegemonic aims, Washington threatens humanity — especially with undemocratic Dems in charge.

America today is more unsafe and unfit to live in for most of its people and others abroad than ever before.

Along with endless wars by hot and other means against invented enemies, the land of opportunity I recall as an adolescent and youth no longer exists.

Governance for belligerent and monied interests exclusively replaced what I remember growing up long ago.

The Times and other establishment media support what demands denunciation.

If takes diabolical Great Reset aims are instituted ahead, what follows will be a coup de grace against what remains of free and open societies in the US, West and elsewhere.

Along with likely greater US-led NATO wars than already, dystopian harshness in the US and elsewhere will resemble Dante's hell.

That's where things are heading at a time when the only solution is popular revolution.

There's no other choice to prevent what's too intolerable to accept.

The alternative is the triumph of  diabolical forces over everyone else.

In my 9th decade, my time in hell will be short.

Young people have the most to lose — their future if don't go all-out to resist what no one should tolerate anywhere.