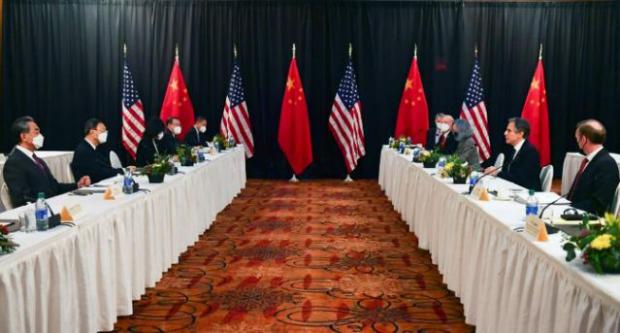 Postmortems on Sino/US Differences on Display in Anchorage

Both sides expected nothing from two days of talks in Anchorage, things turning out this way.

Major Sino/US differences are irreconcilable because both right wings of the US war party want China's growing prominence on the world stage undermined.

Washington treats all nations free from its control the same way. Imperial arrogance defines how it operates.

While China seeks peace, stability and cooperative relations with other nations, the US wages endless wars by hot and/or other means for unchallenged global dominance it won't achieve but pursues anyway.

Its hostility toward China, Russia and Iran risks unthinkable nuclear war by accident or design.

Former US diplomat Chas Freeman believes the US risks "sleepwalking into a war with China it does not want and cannot now win."

"Such a war would likely end US primacy in East Asia."

"It certainly would poison prospects for great power cooperation on planet-wide problems."

Taiwan is a flashpoint for possible Sino/US war.

Beijing no longer believes the Taiwan issue can be resolved diplomatically because US dark forces oppose reunification.

Has China given up on engaging with the US diplomatically — other than going through the motions alone?

The US side has no intention of respecting China's sovereign independence, territorial integrity, and other fundamental rights.

Following talks, interventionist Blinken lashed out at Beijing with one false accusation after another.

The Biden regime is trying to cobble together an anti-China Indo/Pacific  NATO.

It's a foolhardy aim in a region that prioritizes peace and cooperative economic and trade relations, shunning confrontation.

Regional countries want good relations with China and the US.

They oppose playing one side against the other — how the US operates worldwide in pursuit of its hegemonic aims.

While Washington engages in war by other means against China, Russia and other countries free from its control, its invented adversaries and enemies seek peace, dialogue, and cooperative relations with other nations.

Both "sides should follow the policy of 'no conflict' to guide our path towards a healthy and stable trajectory moving forward."

What China prioritizes the US rejects.

In sharp contrast to US belligerence worldwide, Yang stressed that Beijing does not "believe in invading through the use of force, or to topple other regimes through various means, or to massacre the people of other countries, because all of those would only cause turmoil and instability in this world."

The US side seeks dominance over China, cooperative relations ruled out.

A face-to-face meeting between Chinese President Xi Jinping and Biden is off the table at this time.

According to an unnamed Chinese source, Xi has no plans to visit the US.

"(A)ny follow-up would happen only after China makes some concessions on the Hong Kong, Taiwan and Xinjiang issues."

"But Beijing stressed there would be no concessions on (these and other) issues that relate to the country's core interests."

Both sides are worlds apart on major issues relating to China's sovereignty, territorial integrity, and relations to the world community of nations.

While China prioritizes cooperative relations with other nations, the US seeks unchallenged global dominance — by brute force if that's what it takes to achieve its aims.

It's an agenda for confrontation over engaging with other nations cooperatively.

As China's prominence grows on the world stage, imperial USA's influence is declining because of its imperial arrogance and unwillingness to change.