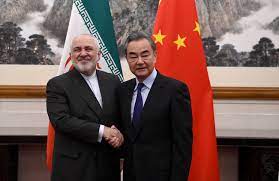 Chinese Foreign Minister Wang Yi is in Tehran for the historic signing on Saturday.

"This plan proves failure of the United States' policies to isolate Iran, sever Iran's relations with the international community and also to harm Iran's will to expand relations with other countries," adding:

It "encourage(s) multilateralism, support(s) equal rights of nations, and insist(s) on domestic development…"

"This cooperation is a ground for Iran and China's participation in basic projects and development of  infrastructure, including the large 'Belt and Road' initiative, and an opportunity to attract investment in various economic fields, including industry, tourism, information technology and communication."

The agreement builds on a 2016 bilateral agreement between both countries.

The Sino-Iranian Comprehensive Strategic Partnership flies in the face of all-out US efforts to weaken, isolate and undermine both countries.

According to a 2016 agreement between the presidents of the Islamic Republic of Iran and the People's Republic of China, stipulated in Article VI of the communique during the honorable Chinese president's visit to Tehran, the two countries have explicitly expressed their political determination to promote and deepen the relations strategically and decided to devise a comprehensive 25-year roadmap between the two countries to become the basis for the coherent and all-out expansion of the political and economic relations between Iran and China in the years to come," adding:

"The preliminary draft of the document has been prepared with the participation of specialized institutions from the two countries and is currently undergoing the negotiation stage."

"Naturally, after finalization of the negotiations, the document will be submitted to the representatives of people in the parliament for legal procedures."

"Strategic relations between Iran and China entail mutual key interests for the people of the two countries."

Their "enemies will make every effort (to obstruct) negotiations…"

"Fulfillment of Iran's national interests has been the only guiding principle for the Ministry of Foreign Affairs in devising the strategic document, and the negotiations have been held with utmost carefulness and meticulousness, and the people of Iran will soon observe its results."

The Sino/Iran accord will advance the economic and strategic interests of both countries at the expense of US imperial aims to weaken and undermine their development.

Iranian Foreign Ministry spokesman Saeed Khatibzadeh said "the document (will) serve as a road map for Iran-China relations in the next 25 years."

According to Oil Price.com, the agreement includes joint Sino/Iranian development of oil-rich  West Karoun fields, as well as "more challenging" ones in "reservoirs (Iran) shares with Iraq."

China is committed to developing vast untapped Iranian reserves because of its own large-scale energy needs.

"China will invest US$280 billion in developing Iran's oil, gas, and petrochemicals sectors" during the first five years of the 25-year agreement.

"There will be another US$120 billion of investment" by China, $400 billion in total.

In return, "Chinese companies will be given the first option to bid on any new – or stalled or uncompleted – oil, gas, and petrochemicals projects in Iran."

"China will also be able to buy any and all oil, gas, and petchems products at a minimum guaranteed discount of 12 per cent to the six-month rolling mean average price of comparable benchmark products, plus another 6 to 8 per cent of that metric for risk-adjusted compensation."

China will be involved in "build(ing) out of Iran's core infrastructure" as part of its "One Belt, One Road" initiative.

It's a longterm project for greater regional integration, numerous countries involved in over $1 trillion in investment.

"The accord is expected to include (large-scale) Chinese investments in Iran's energy and infrastructure sectors."

The historic agreement to be signed Saturday will be a major step toward achieving this objective.