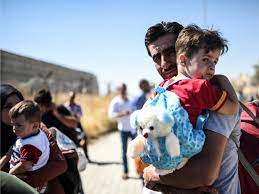 Over a decade of US-Led aggression in Syria devastated the country and its people.

It's because the US and its imperial partners are hellbent for "economically strangling" the republic, isolating it, and blocking return of its refugees.

Mizintsev and Makhlouf issued a joint statement, saying the following:

"The damage that Americans and their satellites inflicted on the Syrian state (caused) a humanitarian catastrophe that could trigger a new migration crisis."

"According to the International Committee of the Red Cross, the number of Syrian citizens in need has increased, while the US and Western countries do not accept responsibility for the catastrophe" they created.

On March 29 and 30, a virtual EU/UN summit was held in Brussels on "the future of Syria" that excluded participation of its legitimate government — one of many examples of imperial arrogance.

UN participation shows its support for US-led aggression instead of condemning it.

An EU/UN propaganda statement defied reality by claiming that summit participants "support the Syrian people" — by smashing and immiserating them in cahoots with US-led aggression since March 2011.

The summit was all about continuing endless war while pretending concern for long-suffering Syrians participants don't give a damn about.

Russia's Mizintsev and Syria's Makhlouf mocked alleged concerns  for the country's ordinary people by summit participants — stressing that they intend using proceedings "as a platform for new (illegal) sanctions," adding:

Summit participants (pretend to be) committ(ed) to Syria's sovereignty and territorial integrity, but 'turn a blind eye to' illegal occupation of its territory and misappropriation of national wealth carried out by the US and its allies."

They support endless war and balkanization of Syrian territory to dismember and eliminate its existence.

Russia is committed to restoration of peace and stability to the country, but it's up against US rage for endless war — supported by its European and regional partners for the rape and destruction of the Syrian Arab Republic.

Millions of displaced Syrian civilians and others in harm's way are caught in the onslaught with no end.

In another decade, will it still be raging like endless US war in Afghanistan and Yemen —  intermittently as well in Iraq and elsewhere?

In cahoots with the US and other Western regimes, Britain "keeps justifying pseudo-humanitarian…White Helmets with persistence."

"This practice continues even though there is increasingly more evidence about (their) merging with terrorists."

"Also, there is more and more evidence to prove that videos that they produced and that the majority of Western allegations against Damascus are based on what was staged."

Many times "we denounced those fakes, shared relevant materials, and hosted press briefings."

"However, you would rather ignore all this, because the truth is too inconvenient and bitter-tasting."

"We understand your urge to justify yourselves in front of British taxpayers for the squandering of funds, allocated to support the alleged Syrian opposition."

"This is a very uneasy business, especially in light of the increasing number of questions that come to the surface regarding (who's) sponsoring White Helmets" terrorists — a diabolical US/UK alliance.