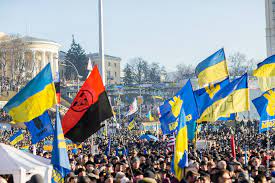 US installed fascist tyranny in Ukraine is a festering hot spot in Europe's heartland along Russia's border.

The Biden regime "affirm(s)  unwavering support for Ukraine's sovereignty and territorial integrity in the face of Russia's ongoing aggression (sic)."

"The (US installed and supported) Ukrainian (regime) is very pleased with (Friday's) call and sincerely believes (the Biden regime) prioritizes restoring Ukraine's territorial integrity (sic) and its Western integration."

Are Biden regime dark forces plotting war on Russia over the phony pretext of protecting Ukrainian sovereignty and territorial integrity — that faces no external threats and needs no protection.

Over the weekend, a joint statement by German Foreign Minister Heiko Mass and his French counterpart Jean-Yves Le Drian expressed "concern about an increase in the number of ceasefire violations" in southeastern Ukraine — without laying blame where it belongs, instead adding:

"We reaffirm our support for the sovereignty and territorial integrity of Ukraine within its internationally recognized borders (sic)."

Kiev considers European silence on escalating confict Donbass in Ukraine's southeast by its forces "as carte blanche for a military operation and for restoring territorial (sic) integrity by force."

"Russia says there must be no force, but only a direct dialogue between the conflicting states."

"The statement (by German and French foreign ministers) adds oil to the flame of the conflict."

Days earlier "Ukrainian shelling of the (Donetsk People's Republic in Donbass) was conducted and a six-year-old child died."

"But there is no word about this" from the West — or about daily shelling by Ukrainian forces.

Instead, ruling regimes in the US and Europe falsely accuse Russia of aggression.

According to Kosachev, if Europe opposed the Obama/Biden's 2014 coup in Ukraine, aggression by Kiev against Donbass that followed, and "fully observe(d) common European values in regard to its citizens," endless conflict over the past seven years could have been prevented.

Instead, Europe sided with US support for Kiev's aggression against the People's Republics of Donetsk and Lugansk in Donbass — their leadership refusing to live under the scourge of fascist tyranny.

On Saturday, the Donetsk People's Republic's mission to the Joint Center on Ceasefire Coordination and Control (JCCC) said that Ukrainian forces violated the ceasefire eight times in the past 24 hours, firing nearly 60 shells into its territory.

Since February, much the same has been going on daily.

"We will discuss with the Russian Foreign Ministry and (its) senior officials measures that are to be taken" to protect Russian nationals in Ukraine "in order not to leave our compatriots" without support from Moscow.

In 2007, Russia established an office in Ukraine to aid its nationals in the country as needed.

If full-scale US-orchestrated Kiev aggression erupts in Donbass — threatening Russian nationals in the breakaway republics — will Moscow intervene cross-border to protect them from harm?

In August 2008, when US-orchestrated Georgian aggression erupted against S. Ossetia, Moscow intervened to help its nationals in harm's way.

A similar scenario may unfold ahead.

Justifiable Russian intervention could resolve things in days against Ukrainian conscripts — much like its quick resolution in 2008 against Georgian aggression.

Biden regime hardliners are pushing the envelope for possible confrontation with Russia.

Putin earlier said that Moscow must "react to what's going on around us."

Given what's going on in Ukraine near its borders, preparations to protect its security and nationals in Donbass should be prioritized.

What Would Hunter Biden's Laptop Reveal About The Coming Ukraine War?

Will Ukraine Become a Flashpoint for US War on Russia?

The Brewing Conflict In Ukraine