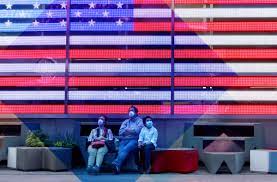 The US healthcare industry is misnamed — what more accurately should be called a sickness industry.

Over two-thirds of Americans use one or more legal drugs. They all have potential harmful to health side effects.

Their use and misuse is the third leading cause of deaths in the US.

In October 2020, Forbes magazine reported that "US prescription drug spending exceeds $500 billion a year and is growing at a rate that's three times faster than inflation."

Pre-seasonal flu renamed covid, the US was around a $30 billion annual market for vaccines.

Given what's going on, perhaps this spending level will be reached by yearend or in 2022.

The US public is being mind-manipulated to falsely believe that health protection comes from a syringe.

Ties between Pharma and US/Western public health agencies are incestuous — serving their interests at the expense of public health, not the other way around.

According to Children's Health Defense (CHD), "American children have never been sicker with a vast array of chronic illnesses," explaining:

Over half of US children "had at least one of 20 chronic health conditions."

US "(l)ife expectancy is falling and infant mortality is rising."

"US children are 76% more likely to die before their first birthday than infants in other wealthy countries."

Around half of Americans aged 13 - 18 have been "diagnosed with at least one mental, emotional, and/or behavioral disorder."

According to the US war department, over two-thirds of youths in the country are unfit for military service "because of obesity, asthma, hearing and eyesight problems and mental illness."

Mass-vaxxing plays a leading role in creating illness, not protecting from it, Kennedy's CHD, explaining:

US "(c)hildren vaccinated according to the standard schedule had significantly more outpatient and emergency department visits than 'undervaccinated' children."

The more vaccines taken, the greater the harm to health.

According to a 2017 study, "vaccinated children had a more than twofold greater odds of having been diagnosed with any chronic illness compared to unvaccinated children, and a roughly fourfold greater odds of a diagnosed neuro-developmental disorder (learning disabilities and/or ADHD and/or ASD), as well as a far greater likelihood of having one or more allergic conditions," CHD reported.

These experimental drugs fail to achieve what's claimed about them.

They harm and don't protect.

Almost no one under age-70, without a serious preexisting condition, is at risk of dying from seasonal flu now called covid.

Manipulating people to be unnecessarily jabbed is "unethical (and) criminal," Bhakd stressed.

It's "so commonplace that diseases that are indeed dis-eases have become normalized, such as chronic asthma, allergies, gut issues, neurologic issues — ADHD to autism spectrum disorders."

"And there are many others, obesity, metabolic disturbances and every other disorder is becoming normalized because they are so commonplace."

Decades earlier children in the US were much healthier than ones today because of proliferated environmental toxins — including hazardous to health GMO foods, ingredients, and drugs, notably in the age of flu now called covid.

They're "genetically produced compounds made with messenger RNA that then tells your DNA what to transcribe."

"Some of these medical interventions have been created using adenoviruses."

"Adenoviruses are common infections in kids."

"That they don't react with our own DNA is misguided."

Perro added that "(m)ainstream medicine is outdated and no longer relevant to the dangers facing our children today."

"(T)he leading cause of children's demise right now (are) the alterations to the microbiota, the microbiome."

"We as integrative medicine practitioners, particularly during this particular era in this last year, have been marginalized with our integrative tools."

"(I)t's horrific how we've been marginalized to kind of promote a single-minded agenda and to discredit those of us that practice holistically."

"There has been a campaign to discredit and censor our group."

We're being lied to and mass deceived by Western governments, their hostile to public health officials, Pharma wanting maximum profits, and media press agents for all of the above.

They want us jabbed and rejabbed with what harms health, not protects it.

Mandating masks and social distancing is all about enforcing draconian social control — unrelated to protecting and preserving health.

Mass-jabbing madness, along with all else mandated and promoted is harmful to health, not beneficial.

Since last year, we've been betrayed by diabolical dark forces in the US and West.

They're hostile to public health, well-being, and safety by pushing a humanly destructive protocol to be rejected, not followed.

Fake News Below Is Hazardous to Your Health

Promoting and Profiting from Mass-Toxification