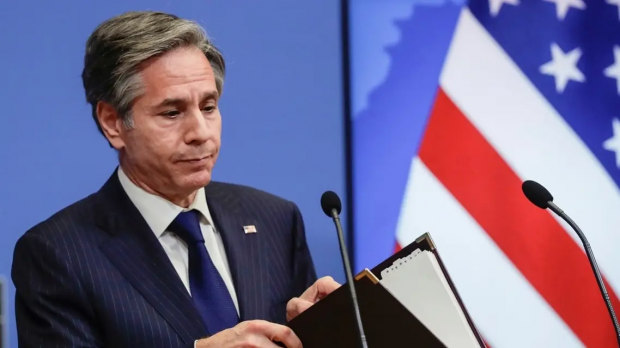 Puppet president Zelensky — a caricature of the real thing — governs by US diktats on all things Russia.

Next Wednesday, he'll meet with interventionist Blinken in Kiev for instructions on continuing forever US-orchestrated war on Donbass, along with further hostility toward Russia.

According to State Department propaganda, Blinken will "reaffirm unwavering US support for Ukraine's sovereignty and territorial integrity in the face of Russia's aggression (sic)" that doesn't exist.

Forever war on invented enemies is how hegemon USA and its imperial partners operate.

The US-dominated West and apartheid Israel never accepted what just societies most cherish.

Defying reality on Thursday, the State Department said the Biden regime "will continue to support…advancing democratic institutions (in) Ukraine" that don't exist and Washington tolerates nowhere.

The self-styled newspaper of record's customary litany of bald-faced Big Lies followed on Crimea, Kiev's aggression blamed on Moscow, and other historical revisionism — anything and everything to bash Russia by making stuff up.

No Russian "aggression" on Ukraine exists — or against any other countries, no "foment(ing) rebellion" by Donbass, no "intimidation of Ukraine," no "promotion of democracy" by the US anywhere, no toleration of it where it exists.

Since usurping power by election fraud, Biden regime hardliners pushed the envelope dangerously toward direct confrontation with Russia and China.

"We stand by that decision and all subsequent decisions…and as I said, NATO…reiterate(s)" it.

NATO is committed to "enlargement" — it's US-controlled agenda all about offense against invented enemies, not collective defense at a time when alliance members have no enemies — except invented ones.

According to Ukraine's prime minister Denys Shmyhal, "NATO membership for Ukraine is a key priority."

"It is reflected in our constitution. (W)e discussed it with (Stoltenberg), and we are absolutely ready."

Saying it's "the only way to end war in Donbass" ignored intermittent US-orchestrated Kiev aggression since Apil 2014.

According to Blinken's spokesman Price, the Biden regime is "committed to ensuring that aspirant countries wishing to join NATO meet the organization's standard for membership (sic)."

"We support our partner Ukraine in the fight against Russian aggression (sic)."

"(W)e are fully supportive and affirm NATO's open door policy, and we continue to look forward to working closely with Ukraine" — in advancing US imperial interests.

According to Article 5 of the alliance's founding treaty:

If occurs, they affirm the right to invoke the UN Charter right of self-defense to "assist" the attacked nation.

Along with its status as an alliance enhanced opportunities partner, Ukraine (in 1995) became the first former Soviet Republic to join NATO's so-called Partnership for Peace, a notion abhorred by the US and its imperial partners.

Vladimir Putin earlier stressed that "a powerful military bloc (along Russia's border) will be considered (a) direct threat to our country's security," adding:

Granting NATO membership to Ukraine and/or Georgia will have "extremely negative consequences."

Their membership would violate "treaties between Russia and NATO."

Russian Foreign Ministry spokeswoman Maria Zakharova said NATO membership for Ukraine is not only contrary to peace but will "lead to a large-scale rise in tensions in the southeast, possibly causing irreversible consequences for Ukraine's statehood."

Kremlin spokesman Dmitry Peskov earlier demanded "a 100% guarantee that no one would think about Ukraine joining NATO."

Since Biden regime hardliners replaced their predecessors by usurping power, the threat of direct US confrontation with Russia became greater than any time since the 1962 missiles of October.

At the time, Cold War "mutually assured destruction (MAD)" kept these weapons from being used. Soviet Russia never intended to use them preemptively.

Nor did Jack Kennedy consider conflict as a way to resolve issues.

In the aftermath of the Cuban missile crisis, he stressed that he never had any intention of belligerence, diplomatic resolution his option of choice.

Cognitively impaired or fully in control of his mental faculties Biden never was and is not now remotely of JFK's stature.

Nor were any other US presidents post-WW II.

Given heightened tensions between the Biden regime and nations free from its control, global war could be "a temper tantrum away," according to how to the International Campaign to Abolish Nuclear Weapons' earlier characterized the threat.

Fascist Ukraine: A Hostile US Military Base Along Russia's Borders