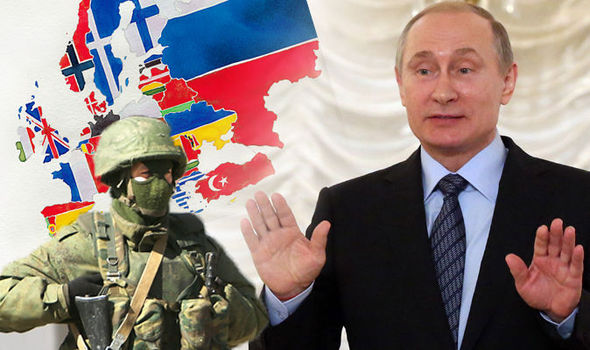 Democratic Russia is a leading proponent of world peace, stability, cooperative relations with other countries, and compliance with the rule of law.

In stark contrast, hegemon USA and its imperial partners represent an unparalleled threat to everyone everywhere — at home and abroad worldwide.

Since established after the Soviet Union's dissolution in December 1991, the Russian Federation never attacked or threatened other nation.

Its geopolitical agenda is polar opposite how hegemon USA operates.

Throughout the post-WW II period, the US raped and destroyed one country after another — for the "crime" of not bowing to a higher power in Washington.

From preemptive war on nonbelligerent North Korea to the present day, Washington's only enemies were and remain invented.

No real ones existed since WW II ended.

None exist today — not Russia, China, Iran, North Korea, Cuba, or any other nation poses a threat to US sovereignty, territorial integrity, or overall security.

Claims otherwise by its ruling authorities and press agent media over the last 75 years were fabricated to maintain a heightened state of national emergency over barbarians at the gates that haven't existed since the Civil War ended in 1865.

"If you want to talk about a nation that could pose an existential threat to the United States, I'd have to point to Russia (sic)."

Whenever claims like the above surface, no evidence supports them because there is none.

So they're invented to unjustifiably justify spending as much or more on militarism, warmaking, and a global empire of bases than all other nations combined — while homeland needs vital to most people go begging.

Moscow is likely to "threaten our interests for the next 20 years (sic) as they attempt to regain control of historic spheres of influence (sic) and shape European economic and security structures in their favor (sic)," adding:

Moscow seeks to undermine US-dominated NATO in "all regions of the world (sic)."

Around the same time, head of the  US Strategic Command General John Hyten expressed concern about the Pentagon's ability to defend the nation against a Russian threat that didn't exist and doesn't now.

Last February, US European Command/Supreme Allied Commander Europe General Tod Wolters falsely accused Russia of "engag(ing) in destabilizing and malign activities across the globe (sic), with many of those activities happening close to home" in Europe (sic)," adding:

Moscow "remains an enduring existential threat to the United States and our European allies (sic)."

Last week, US Defense Intelligence Agency director General Scott Berrier resurrected the myth of a Russian "existential threat" to the US.

Throughout the Cold War and its aftermath to the present day, Russia's only threat to the US was and remains retaliatory against preemptive US aggression if occurs.

Earlier and current claims otherwise by US politicians, generals, and admirals are all about wanting virtual open-checkbook amounts spent on preparing for and waging endless preemptive wars on invented enemies.

Since Soviet Russia dissolved, countless trillions of dollars were poured down a black hole of waste, fraud and abuse to defend the US against Russia, China, Iran, and other nonexistent enemies.

There's no ambiguity about US hegemonic aims.

They're all about seeking dominance over other countries, their resources and populations worldwide — by whatever it takes to achieve its aims, notably by brute force and other hostile actions.

Under both right wings of its war party, the US poses an unparalleled threat to world peace, stability, and humanity's survival.

Psychologist Abraham Maslow once explained that when all someone has "is a hammer, everything looks like a nail."

That's how US Pentagon and political militarists think and operate.

They plot ways to use their hammer against one nation after another.

At a time when no nations remotely threaten US security, dominant militarists in Washington threaten to immolate planet earth by their rage to own it.

Putin fooled the world: he assembled an inflatable army to scare his enemies