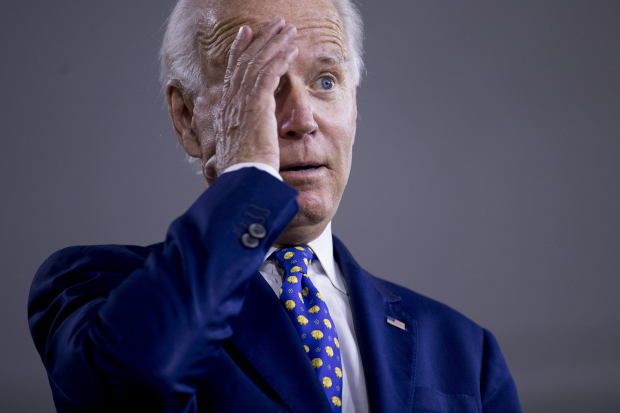 Biden's rap sheet includes nearly half a century of backing privilege over populism.

It's about shilling for powerful interests, supporting US wars of aggression and coups, allying with Wall Street and other corporate predators over the general welfare, and abusing power in countless other ways.

There's lots more about one of the most disreputable figures in US political history.

Biden's long history of sexual harassment alone should have disqualified him from any public office.

Selected, not elected, to replace Trump by brazen fraud, he serves illegitimately.

He's too cognitively impaired to perform his duties so requires a double to impersonate him in public appearances.

His 1988 presidential campaign ended after reports of exaggerating his poor academic record and plagiarizing a law review article while at Syracuse University College of Law, as well as using content of others' speeches for his own without attribution.

Last week, WaPo published an op-ed written for him.

He's unable to speak or write coherently so others do it for him.

The ghost-written op-ed focused on meeting with Vladimir Putin on June 16 — by his impersonator, not him.

The op-ed lied claiming that the summit and meetings in Europe preceding it comes during an alleged "pandemic" that doesn't exist.

It lied saying the trip aims to "demonstrat(e) the capacity of democracies" — that are nonexistent in the West.

It lied claiming dramatic economic growth at a time of protracted Depression conditions with over 25% unemployment, underemployment for most US workers, and double-digit inflation — based how economic data were calculated pre-1990.

It lied claiming "robust, inclusive global economic recovery will be our top priorities."

It lied saying the US prioritizes "peace" at a time when it's waging endless wars by hot and/or other means against numerous countries free from its hegemonic control.

It falsely accused Russia of "aggression in Ukraine" — waged by the US, its puppet regime in Kiev, and imperial partners, not Moscow anywhere.

It lied claiming the US "does not seek conflict (sic)."

It lied saying the Biden regime "want(s) a stable and predictable relationship where we can work with Russia on issues like strategic stability and arms control."

Longstanding US relations with the world community of nations is all about pursuing unchallenged dominance by whatever it takes to achieve its diabolical aims.

It falsely accused Russia of "interfer(ing) in (US) democratic elections (sic).

It repeatedly lied about alleged Western "democracies" that don't exist — notably not in the US where police state-enforced totalitarian rule in on a fast track toward full-blown tyranny.

It lied about invented "threats (from) adversaries" that don't exist.

Saying the US "must lead the world from a position of strength" is all about supporting endless wars by hot and/or other means — including against ordinary people at home and abroad.

Today is the most perilous time in world history.

A state of US-led Western war on humanity exists.

Their ruling regimes are the mortal enemies of ordinary people everywhere.

An unholy alliance of US extremist policymakers allied with likeminded ones in partner countries risks the worst of times ahead.

Resist or perish — the former the only option against brave new world tyranny.

The alternative assures our demise — what Orwell called "a boot stamping on a human face, forever."