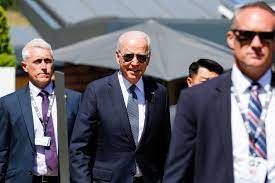 Remarks by Biden's Double at G7

In the Hollywood film Dave, after fictional US president Bill Mitchell is incapacitated by a severe stroke, look-alike temp employment agency manager Dave Kovic (played by Kevin Kline) is enlisted to impersonate him.

In real life USA, a double represents cognitively impaired Biden in public — especially for addresses and currently in Europe at meetings with G7 leaders, NATO allies, and at an upcoming so-called summit with Vladimir Putin.

Aware of the charade, congressional members, key foreign leaders, and establishment media suppress what's going on — while the real Biden is hidden at the White House or who knows where.

At a Sunday press conference in Britain after meeting with G7 leaders, Biden's impersonator recited or paraphrased the following pre-scripted remarks:

A dubious — unlikely to be approved by Congress — "commitment (was) made (for a so-called) "Build Back Better World Partnership" that involves spending "more than $40 trillion (to compete with China's) Belt and Road Initiative."

Agreement on addressing environmental issues and corruption was more rhetorical posturing than reality.

Working on "cyber (and related) threats" begins at where they emanate from in the West.

So-called G7 "democratic values" are more illusion than reality under police state enforced totalitarian rule on a fast-track toward full-blown tyranny in the West.

Saying "America is back in the business of leading the world alongside (likeminded) nations" left their permanent war on humanity unexplained.

Quoting NATO's collective defense principle under the alliance's founding treaty Article 5, Biden's double said "(an) attack on one is an attack on all" — at a time when no foreign threats exist to its members

Discussing his June 16 meeting with Vladimir Putin in Geneva, he belligerently said he'll "make (himself) very clear what the conditions are to get a better relationship…with Russia (sic)."

Left unexplained is that they require Moscow to subordinate the country's sovereign rights to US/Western interests.

What clearly won't happen assures worsening bilateral relations ahead with no prospect of improving them.

When Biden's double meets with Putin, he'll "be very straightforward with him about our concerns (sic)."

"And I will make clear my view of how that meeting turned out."

"There's no guarantee you can change a person's behavior or the behavior of his country."

"Autocrats (sic) have enormous power and they don't have to answer to a public."

"And the fact is that it may very well be, if I respond in kind — which I will — that it doesn't dissuade him and he wants to keep going."

"(W)e're going to be moving in a direction where Russia has its own dilemmas."

Its activities "are contrary to international norms (sic)."

"(T)hey have also bitten off some real problems they're going to have trouble chewing on (sic)."

Falsely accusing Russia of "interfer(ing) in our elections (sic)," cyber-attacking the US (sic), he vowed further toughness ahead than already.

Claiming the US seeks "to resolve those actions which we think are inconsistent with international norms" begins at home and in complicit Western capitals.

He ignored real ones committed worldwide by the world's leading human rights abuser USA — at home and abroad.

He falsely implied that China's Belt and Road Initiative is undemocratic.

Washington's geopolitical agenda aims for dominating nations free from its control, looting their resources, and subjugating their people.

Russia, China, and other nations — free from US control — operate by higher standards, according to international law the US-dominated West long ago abandoned.

There's no chance whatever for improved bilateral relations from talks between Putin and Biden's double.

At best, they'll be another exercise in futility, accomplishing nothing positive.

At worst, bilateral relations may sink to a new low in their aftermath.

The latter is most likely.

If I Ran The Circus

Whitehead's 'State Of The Nation': Still Divided, Enslaved, & Locked Down

The State of Our Nation: Still Divided, Enslaved & Locked Down